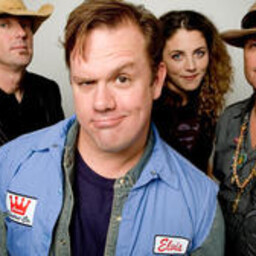 Cowboy Mouth is a rock band based in New Orleans, Louisiana, taking their name from the title of a Sam Shepard play which got the term from a Bob Dylan song. The nucleus of the band, Fred Leblanc (Drums, Vocals) and John Thomas Griffith (Guitar, Vocals), formed in the early 1990s, and they climbed the ladder from an opening act living in a van to a powerhouse live act that has been called "a religious experience" by more than one music journalist. In particular their 2004 live Lincoln Park, Chicago album "Live From the Zoo" received incredible criticial praise, especially form Rolling Stone. They have received modest radio play yet every year the band plays before more than half a million people at live shows around the nation. Some of their classic songs include "Everybody Loves Jill" (where the audience throws red spoons on stage), "Hurricane Party" (audience tosses Tootsie Rolls), "Easy," "Better,", "Disconnected", and "Jenny Says," the their most famous song and the traditional closing song of every show. They also perform a version of "Born to Run" on the Light of Day tribute album to Springsteen. "The Avenue" after the famed St. Charles Avenue, a heart-wrenching plea for New Orleans' return to normal in the wake of Hurricane Katrina, was treated as a athem to many in Lousiana. However, Leblanc has since added the line "The Saints won the f****** Superbowl" as a upbeat note. Now a regular of the Regis and Kelly show Leblanc has written a song ,"Kelly Ripa", about Leblanc's somewhat obsesion with the co-host. They have since performed the song on the show, much to the dancing Ripa's delight. They have also as one of their more popular songs "Joe Strummer", a ode to the late-great Clash guitarist. Lead singer Fred Leblanc, particularly in opening and closing numbers, exhorts the crowd with encouragements to let go of cares and worries, "I don't care what's buggin' you, I don't care what's bringing you down, the only thing that matters is right here, right now!" With roots always in New Orleans Cowboy Mouth constantly plays at the Annual Jazz Fest and is always one of the fan favorites there. Read more on Last.fm. User-contributed text is available under the Creative Commons By-SA License; additional terms may apply.

Light Of Day: A Tribute To Bruce Springsteen

Life As A Dog

In Bed With Marina