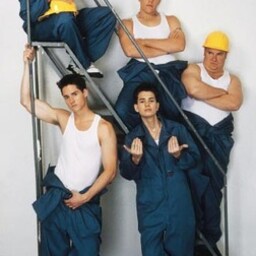 2gether was a fictional boy band created for the 2000 MTV film of the same name. The band was portrayed by comedic actors Evan Farmer (as "Jerry O'Keefe"), Noah Bastian (as "Chad Linus"), Michael Cuccione (as "Jason McKnight"), Kevin Farley (as "Doug Linus") and Alex Solowitz ("Mickey Parke"). After the success of the film, the band released two albums of satirical boy band music, toured as the opening act of Britney Spears and starred in two seasons of an eponymous television comedy series. The group was disbanded in 2001, shortly after the death of Michael Cuccione from complications of Hodgkin's Lymphoma.

In early 2012, the band announced plans for a reunion. With MTV on board, the surviving members plan on a handful of shows around the country. Read more on Last.fm. User-contributed text is available under the Creative Commons By-SA License; additional terms may apply.

2gether music from the mtv ori

The Hardest Part Of Breaking Up (Is Getting Back Your Stuff)