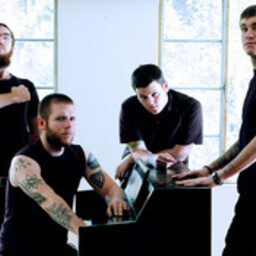 Тексты песен Against Me!

DVD-релизы:
2004 - We're Never Going Home (Fat Wreck Chords)
2007 - Live At The Key Club (Sire Records)
Read more on Last.fm. User-contributed text is available under the Creative Commons By-SA License; additional terms may apply.
Against Me! is a punk rock band originally from Naples, Florida, and later relocated to Gainesville, Florida. They are known for their heavily folk-influenced sound and energetic live shows (Spin named them one of the 25 greatest live bands in 2006). Their first full-length album, released on No Idea Records in 2002, was the highly-acclaimed Reinventing Axl Rose. In December 2005, they signed to Sire Records, and released their major label debut, New Wave, on July 10, 2007. June 4, 2010 saw the release of their fifth studio album, White Crosses.

Laura Jane Grace started Against Me! in 1997 as a solo act at the age of 17. She would only occasionally perform with support from drummers and/or bassists. This period in the band was marked by playing guerrilla shows in a college apartment complex laundromat, emphasizing the D.I.Y. sentiments of their work. Laura self-released one demo tape, officially entitled Against Me!, but more commonly known as Tom's Demo. While copies of the cassette itself are extremely rare, internet file-sharing programs have helped to circulate the songs amongst fans.

Another demo cassette was released the following year on Misanthrope Records, with a slightly more complete band, titled Vivida Vis. Only five hundred copies of this album were made, but file-sharing once again popularized it. Perhaps the most well-known song on the record, "Shit Stroll" is still routinely requested by the audience at Against Me! shows. The band rarely, if ever, obliges these requests.

In 2001, Against Me! celebrated their first widely successful release in Crime as Forgiven By. The four-song 7" and six-song CD-EP was joint-released on Plan It X Records and Sabot Productions. The 7" came first; the CD that followed included two bonus tracks: Impact, which remains a staple of live shows, and Burn.

After Crime, a four-song acoustic 7" was released. While technically untitled, the album is most commonly referred to as The Acoustic EP. It has since been re-released as a CD-EP with two extra songs. It contains no electric guitar or drums; only Larua's acoustic guitar and bass by Dustin Fridkin. It is widely considered one of the band's definitive releases.

Shortly after the release of the EP, Against Me!'s lineup shifted when Kevin Mahon officially left the band. Warren Oakes took Mahon's place, and James Bowman joined as a second guitarist.

Released in 2002, Reinventing Axl Rose was the band's first full-length album. It featured five new tracks (the other six were re-recorded from their original appearances on Crime and The Acoustic EP). This album was considered a shift because of the addition of electric guitars, as well as the fact that it was their first release a full band. The title track and Baby, I'm an Anarchist! earned significant notoriety in punk rock circles and began to spread the band to a larger fan base.

Later in 2002, a three-song EP entitled The Disco Before the Breakdown was released. The title track is a marked departure from the earlier sound, incorporating friends and musicians from their label, No Idea Records, as a horn section for the first time. Songs such as Tonight We're Gonna Give it 35% showed the band's greatest transition toward a more mainstream rock sound.

Shortly before recording Disco, Against Me!'s lineup changed once again. Fridkin left the band, and was replaced on bass guitar by Andrew Seward. This lineup of Laura, Oakes, Bowman, and Seward has remained constant since. Interestingly, the common set-up of the band at live shows features Laura (the chief vocalist) stage right, while Seward takes center stage.

Their second full length album, As the Eternal Cowboy, was released on popular punk label Fat Wreck Chords. Though many fans welcomed the opportunity of increased exposure for the band, some older fans and those with anarchist sensibilities themselves were less pleased. Some even considered the band sell-outs, claiming that the band had gone against ideals formerly expressed in their music, such as a DIY ethics and a anti-capitalist stance. Ironically, Laura describes the album as sounding "more punk." This album also marked the release of their first single, Sink, Florida, Sink. The divisive effect this record had on their fan base became the topic of their next release, a DVD called We're Never Going Home, a title derived from the song Slurring the Rythyms.

The band's second Fat release, Searching For A Former Clarity, was released on September 6, 2005. It broke them into the mainstream, debuting at #114 on the Billboard charts. The band released a music video for the album's first single, Don't Lose Touch, originally specifically for MySpace. The band performed the song on an episode of Late Night With Conan O'Brien, which aired on September 30, 2005.

On December 21, 2005, it was announced that the band had signed a deal with Sire Records. This decision alienated some of Against Me!'s longtime fans, who felt that the band finally signing to a major label betrayed their anarchistic ethics and longtime beliefs; however the majority of fans remain supportive of the band's decision. Against Me! has stated that a large factor in the decision to switch to Sire was the opportunity to work with Butch Vig, producer for Nirvana's Nevermind.

Against Me! released their first live album (and final Fat release), titled Americans Abroad!!! Against Me!!! Live In London!!!, on August 22, 2006. The album was recorded at the Mean Fiddler in London, England. It features a live version of a previously unreleased song named Americans Abroad (the studio version was later recorded for New Wave). The album was released solely to fill a contractual obligation to Fat Wreck Chords.

On December 29, 2006, Against Me! announced their debut album on Sire, titled New Wave. The album contains ten songs, stretching just over 30 minutes, and was released on July 10, 2007. It debuted at #57 on the Billboard 200 the week of its release. Spin named it the best album of 2007 in their annual top 40 list. It is the first Against Me! album that does not feature at least one acoustic song. Singles include White People For Peace and Thrash Unreal. The latter song reached #11 on the U.S. Modern Rock Chart, becoming the band's first chart single. The album also features Tegan Quin (Tegan and Sara) on the song Borne on the FM Waves of the Heart.

On June 8, 2009, drummer Warren Oakes announced that he would be leaving Against Me! after eight years with the band. His statement indicated the split was amicable, as he left the band to focus his efforts on his new Mexican restaurant, Boca Fiesta. He was replaced by Hot Water Music drummer George Rebelo.

On July 7, 2009, Fat Wreck Chords released The Original Cowboy, an album consisting of unreleased demos recorded prior to the As the Eternal Cowboy session. The demos were recorded by Rob McGregor in Gainesville on July 15, 2003.

On June 7, 2010, Against Me! released their second record with Sire, White Crosses. Fan reception has been mixed. Also in 2010, George Rebelo was replaced as drummer by Jay Weinberg, initially on a temporary basis, but eventually became the permanent drummer.

In May 2012 Laura publicly came out as transgender, having dealt with gender dysphoria since childhood. Laura Jane Grace has begun taking hormones and has underwent electrolysis treatments.

In 2013, where Weinberg was replaced by Atom Willard as the fulltime drummer for the band. Read more on Last.fm. User-contributed text is available under the Creative Commons By-SA License; additional terms may apply.

As the Eternal Cowboy

Searching for a Former Clarity

Americans Abroad!!! Against Me!!! Live In London!!!

The Disco Before the Breakdown

Body Of War: Songs That Inspired An Iraq War Veteran