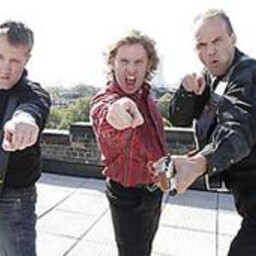 The Worms came together in 1991 to do a few spots on campus radio station CFRC in Kingston, Ontario, and quickly moved to doing spots on the CBC Radio One. Since 1992, the troupe has released 11 albums on their own label and one compilation album under Oglio Records. Their most recent album, Torpid, was released in late 2008. The Worms are currently touring Canada in support of their recent album.

Each album consists mostly of independent tracks paying homage, always humourosly, to different genres and topics. Two exceptions are the 1997 Christmas Turkey, dedicated to songs about Christmas, and the 2003 Semi-Conducted, which is a collection of their songs performed live with the Edmonton Symphony Orchestra.

Rock, folk, ballads, country, Celtic folk, and children's music all have come under their satirical guns.

When not spoofing a particular style of music, the Worms' material pokes fun at various aspects of daily life in Canada with songs like "Canada's Really Big", "The Last Saskatchewan Pirate", "Me Like Hockey", "Rocks and Trees", and "Proud to Be Canadian".

The Arrogant Worms currently consist of:

Former members of the Arrogant Worms include:

Gift Wrapped: The Best Of the Arrogant Worms

The Best Of The Arrogant Worms - Gift Wrapped

Three Dead Trolls in a Baggie