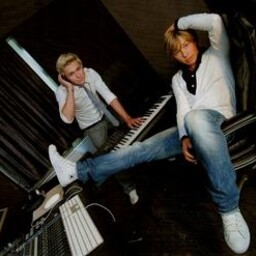 Band name chosen by the first letter of surnames of musicians Dmitri Bikbaev and Vlad Sokolovsky. Soon after this, the groups first song was presented titled „Твой или ничей" (Yours or Nobody's). This was followed by 3 other singles titled „Катя" (Kate), „Кораблики" (Ships) and „Пустота" (Emptiness). These all became hits in the russian music charts.

After Developing initial success, The group began to write down there debut album
„Двухполярный мир" (two-polar world). Which sold over 100 thousand copies and was in the russian album charts for an extremely long time.

The group plays a mixed genre of music, between pop and R'n'B. In an interview
Vlad told Dmitry: it is unimportant, whether people perceive us as „Celebrities“,
Its more important how people perceive our music.

The What CD Volume 7