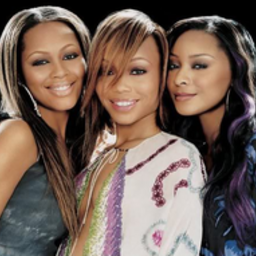 Blaque is an American R&B vocal trio. Blaque stands for Believing in Life and Achieving a Quest for Unity in Everything. The group was originally known as Blaque Ivory and is still known by that name outside the United States. The group consists of members Natina Reed, Shamari Fears and Brandi Williams. They are currently signed to Family Over Everything Ent./Geffen Records.

Natina Reed departed the group to go into ministry in 2003. They replaced her with Erica Pullins. Blaque never debuted with their new member. Shamari was signed with Darkchild and set to debut in 2006, but plans were changed when her and the other original Blaque members reunited.

Reed and Fears both moved to Atlanta, Georgia and met while in high school. Reed formed Blaque Ivory while Fears formed another group called Intrigue. Intrigue won a recording contract with Elektra Records, and Fears met up with Williams at a talent show while a member of that group. Fears left Intrigue to join up with Reed in Blaque Ivory and Williams joined the group shortly thereafter. Reed met Ronald Lopes while singing jingles to earn extra cash and he introduced her to his sister Lisa "Left Eye" Lopes of TLC. Lisa Lopes signed the group to her "Left Eye Productions" and then to Columbia Records.

Their self-titled debut Blaque debuted #53 on the Billboard 200 albums chart and went platinum. Their single "Bring It All to Me" featuring JC Chasez, reached the top 10 on the Billboard Hot 100 singles chart. The album also featured a cover version of "Time after Time" originally recorded by Cyndi Lauper. Their only single to be nominated for a MTV Video Music Award was "I Do" for Best Editing.

While the Blaque album went platinum, their second album Blaque Out was set for release in 2001, but they were dropped from Columbia Records. Their video for the first "Blaque Out" single; "Can't Get It Back" was never released. The album was soon leaked on the Internet. When their mentor Lisa Lopes died in a car crash on April 25, 2002 in Honduras they signed with Elektra Records and began work on their 3rd album. An alternate version of the shelved album was released to iTunes on May 22, 2007.

Their third album Torch featured a number of A-list music industry figures including Missy Elliott, songwriter Linda Perry, and producer Rodney Jerkins. The buzz single was "No Ganksta" which was an answerback song to 50 Cent's song "Wanksta". Missy Elliott produced the intended first single "Ugly". However, because radio did not pick up the song, it was decided to release "I'm Good" instead. "I'm Good" also appeared on the soundtrack for the film Honey.

Due to the poor success "I'm Good" achieved, the release date for Torch was pushed back. Finally, news came up their next single would be "Hopeless" - a man bashing, Darkchild produced song. But it failed to be released. In 2004, Natina left the group to go into ministry. She was soon replaced by singer/rapper Erica Pullins who performed with them overseas although no one really knows where she came from. They recorded some new songs and re-recorded old ones with new member, but the album failed to be released and Blaque disbanded.

Their 2003 contribution to the soundtrack of Honey, "I'm Good", charted on the Rhythmic Top 40.The single also made the Australian Top 40 in March 2004 and charted in Germany and Switzerland. The song was also intended for a UK release. The song gained fair airplay and the video gained good rotation being played on major music channels. However, the record company decided to axe the UK release.

Natina went into ministry in early 2004. She has a son named Tren with rapper Kurupt. Reed died in 2012 at the age of 31 after being struck by a vehicle in an attempt to cross the street.

Shamari was signed to Darkchild Records in 2005. Brandi managed to get a record deal and started working on a solo album. She also appeared on Nelly's first single, from his 2005 album "Sweatsuit," "Grillz". Grillz features Nelly, Paul Wall, Ali & Gipp and, of course, Brandi Williams although she is not credited, promo wise. There is no information regarding Erica.

In 2004 Shamari Fears, Brandi Williams & Erica Pullins reformed Blaque. They performed on several occasions in Germany and other countries. During this time, Erica kept fans up to date via the internet. She stated she is currently working on a solo record.

Their next studio album: Beauty, is set in 2007 through their deal with Family Over Everything Entertainment and Geffen Records. Recently a new song titled "Blue Jeans" has surfaced on the internet which is taken from the upcoming Beauty album.

In addition to their recording work, Reed, Fears, and Williams appeared in the 2000 film Bring It On as members of the East Compton Clovers, the African-American cheerleading squad fronted by Gabrielle Union. Williams also had a small role (playing herself) in the 2001 movie On the Line. Blaque also appears on Lisa "Left Eye" Lopes's 2001 solo debut album, "Supernova", on the track titled "Head to the Sky", which was only released internationally. In 2005, two clips of Shamari's solo songs titled "The One" and "NJ2" were leaked onto the internet. Read more on Last.fm. User-contributed text is available under the Creative Commons By-SA License; additional terms may apply.

Bring It All to Me

Bring It On - Music From The Motion Picture