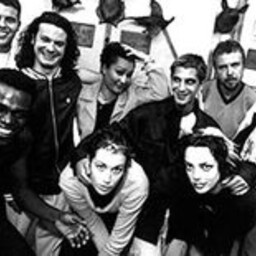 James Di Salvio and E.P. Bergen got together in Manhattan and coined Bran Van 3000 in 1994. Di Salvio was a video director and asked E.P. to come teach him how to produce tracks with a sampler and turntables. Together they went and bought studio equipment in Times Square. E.P. returned to Montreal and immediately co-wrote/produced a single with Jean Leloup called: "Johnny Go". E.P. invited James to come over and record his first ever rap on that song. It later went to number one in the Quebec charts. James Di Salvio also directed the music video. This was in effect the first ever BV3 collaboration.

Together James and E.P. went back to New York to record "Forest" and "Ma Chambre" for Jean Leloup's platinum album "Le Dome". This success inevitably got them a record deal with Audiogram Records. Together with Haig V, they co-produced the first BV3 album. Jean Leloup gave "Forest" to Bran Van 3000. Bergen started a cover of "Come On Feel The Noise" with plans to have Sara Johnston sing on it. Di Salvio discovered Liquid. In 1996, the album was almost finished. As a joke, James and E.P. sent a demo of the unfinished songs "Drinking In LA", "Couch Surfer" and "Everywhere" to the Canadian Music Week contest. Bran Van 3000 came in first place with another act, but got disqualified because there was no real band to perform the showcase. They finished the album and E.P. started auditioning the touring band that included Gary Mackenzie, Nick Hynes and Rob Joanisse.

Bran Van 3000 finally released their first single, "Drinking in L.A.", in February of 1997 in Canada. In April of the same year, the band released their first album, called Glee. It contained 17 tracks, one of them entirely in French called "Forest" featuring Jean Leloup. The song "Everywhere" from the album was featured on the soundtrack to the film Practical Magic. The single Afrodiziak, produced by E.P. Bergen sold 100 000 copies in Germany alone with EMI and appeared in the movie "Xchange". The record went gold in 1998 and won a Juno Award for best alternative album. "Drinking in L.A." also appears in the soundtrack to the film Playing by Heart.

After signing with Capitol Records, Bran Van 3000 began a massive touring schedule. It started across Canada, then zigzagged endlessly across the United States in Bob Dylan's Tour bus. Every day, the band was waiting for confirmation of show dates. The dates were sometimes confirmed the day before and the band would have to drive for ten hours to the next gig, only to find the posters rolled up in the coat check of many venues instead of on the walls. This inadequate tour planning forced the band to play in front of 20 to 50 people a night. Things eventually got better.

In Europe, EMI booked the band months ahead of time so that there was adequate promo. The band enjoyed larger crowds and got the rockstar treatment in every country in Western Europe. They also opened up for Massive Attack, Bjork in sports arenas, as well as Pulp and Moby when they got back home.

In July 1998, "Drinking in L.A." reached No. 36 in the UK Singles Chart,[1] becoming their first transatlantic hit. In August 1999 the single was re-released after the song was featured in a popular TV commercial for Rolling Rock, and peaked at No. 3 in the UK.[1]

In the summer of 2001, Bran Van 3000 released the album Discosis. The song "Astounded" featured the final recorded performance from soul legend Curtis Mayfield before his death and became the most successful Canadian single by the collective. Other collaborators on the album were Senegalese singer Youssou N'Dour and reggae artist Eek-a-Mouse.

As of summer 2002, the band's website indicated that they were not working on new material or touring, nor did they have any plans to do so. E.P. Bergen contacted Audiogram and the publishers in 2006 and got the initial financing of a third album together. It was later announced that BV3 was working on a third album, Rosé, which was released in Canada on October 30 and in the US on November 27, 2007. Rosé was co-produced by James Di Salvio and Sara Johnston with the collaboration of Fatlip, Max-A-Million, Swanza, Chris Opperman, Noel Osborne and others. The album was written in Los Angeles and was recorded at Depeche Mode's studio and in Hollywood at Steve Vai's Studio. On July 1, 2008, the original group got back together, on stage, at the Montreal International Jazz Festival, playing songs from Rosé as well as some of their previous hits, in front of a crowd numbering around 180,000.

James Di Salvio is currently producing a 4th album with a new band. E.P. Bergen is currently composing the musical score for Jean Leloup's upcoming movie Karaoke Dreams that will also include a song from James Di Salvio aka Bran Van 3000. Sara Johnston is currently working on her solo record for 2010. To be continued... Read more on Last.fm. User-contributed text is available under the Creative Commons By-SA License; additional terms may apply.


Bran Van 3000 (also known as Bran Van and BV3) are a Canadian collective (or musical band) from Montreal, Quebec with a techno-infused sound. It was founded by the DJ James Di Salvio, collaborating on a number of songs with Stephane Moraille, Sara Johnston, Jayne Hill, Québécois rock star Jean Leloup and other musicians. Read more on Last.fm. User-contributed text is available under the Creative Commons By-SA License; additional terms may apply.

Afrodiziak(International only) (US Album Version)

The Very Best of New Woman