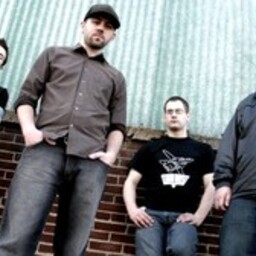 1. Century is an American metalcore band from Lancaster, PA formed in 2005.

2. Century are a French rock band formed in Marseille in 1985

1. Century is a hardcore/metal band formed in 2005 by multi-instrumentalist Carson Slovak. Century was originally conceived as a solo project, but later evolved into a complete band. Slovak writes all of Century's music, and designs all of the artwork and merchandise. In 2005 the band signed a contract with Tribunal Records. On February 7th 2006, Century released its first studio album, Faith and Failure through Tribunal Records. This album saw Carson Slovak as guitarist and producer joined by Mike Guiliano (guitar), Huggie (bass) and Grant McFarland (drums). Before the album was released, McFarland left the band and was replaced by new drummer Matthew Smith.

In February 2009, it was announced that McFarland had rejoined the band, along with new additions: bassist Ricky Armellino, and additional guitarist Todd Mogle. The band has begun work on the follow up to Black Ocean, which they hope to release in late 2009.

2. CENTURY are a French rock band formed in Marseille in 1985. Led by singer and composer Jean-Louis Milford, Century are probably best known for their single "Lover Why" from the album And Soul It Goes in 1986. In Brazil, the tracks "Gone With The Winner" was theme from the soap opera called Hipertensão, and "Lover Why" was theme from the soap opera called Ti Ti Ti, both in 1986, by the Rede Globo TV.

Their hit "Lover why" peaked at #1 (x7) in France and Portugal and #11 in Switzerland. Their second single, "Jane" reached only to number 35 in France.

The band was composed of Jean-Louis Milford (keyboards), Éric Traissard (guitar), Laurent Cokelaere (bass), Christian Portes (drums) and a second guitarist replaced with Jean-Dominique Sallaberry. The lyrics of early successes of the group were all written by Paul Ives. The band split off in 1989. However, the composer/singer, Jean-Louis Milford teamed up with lyricist Francis Nugent Dixon, and since 1989, they have worked together. After several unsuccessful albums, they produced a double CD in 2004 (Timeless).

3. CENTURY was created in August 1995 as Side project of CREMATORY's Drummer Markus Juellich, Gernot Leinert (keyboards) and Michael Rohr (vocals). After a two-year operating phase one in December 1997 with CREMATORY's producer, Gerhard Magin, into the Commusication Tonstudios, they recorded their first demo.

The demo received maximum notes from the press and numerous offers from disk companies. Melting melancholic music with ear worm melodies, their sound has its roots in the Gothic Pop and Dark Wave with main influences of the 80's. That mix from Wave/Pop of the 80's, mixed with modern keyboard elements and driving guitars, is the concept of CENTURY. Their lyrics are the processing of very personal feelings of singer Michael Rohr. The texts figure as mirrors of the self experience and are, in conformity with the music, which listeners tune thoughtfully.

In October 1998 CENTURY signed the first disk contract with USG record. "The Secret Inside" was taken up and mixed in December 98 and January 99 in the Commusication Tonstudios with producer Gerhard Magin (CREMATORY, Theatre OF Tragedy). As guest musicians it succeeded to engage even Markus Tiedemann as guitarist for the poppier elements, against what Kristian Kohlmannslehner was responsible for the heavy guitars.
In April 1999 the Debut album "The Secret Inside" was world-wide published. Around itself the band also toured Germany, as HIM's special guests, to present CENTURY. In the interval May-September of 1999, they supported both Crematory and PARADISE LOST's European tours very successfully.

Which originally began Gernot Leinert (keyboard) and Michael with Markus Juellich (Drums), Rohr(Vocals) as a trio with various guest musicians, became, in time, and particularly because of the successful tours, a complete band, with the addition of Kristian Kohlmannslehner (guitar), Guido Holzmann(bass) and Andreas Neuderth (Drums), a full-fledged band.

Due to the dissolution of USG records in December 1999, CENTURY were left contract-free and signed in August 2000 with Drakkar Entertaiment.

In February 2001 CENTURY functioned as support for CREMATORY on their anniversary route and represented the songs of "Melancholia" impressively on the boards.

In the summer 2001 various festivals and open air concerts were successfully completed. In March 2002 one began with the letter of new Songs, which are still to be published.

Due to large demand and the constantly growing fan support, their out of print debut album "the secret inside", which was no longer available due to the dissolution of the label at that time, USG, was digitally remastered an released with new artwork.

And Soul It Goes

This or the Apocalypse