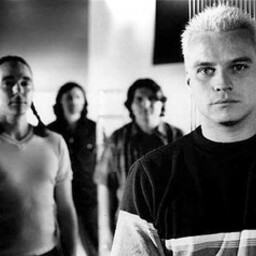 Played The Garage February 2013 and have a further gig lined up at;

Newcastle University Students Union on Friday May 10 2013. Check the NUSU website for details.


China Drum were formed in the late 80's and were made up of Adam Lee (Drums and Vocals), Bill McQueen on guitar and his younger brother Dave on Bass. (They were to be augmented later by Jan Alkema, ex Compulsion, on drums when Adam stepped from behind his kit)

They are probably best described as pop-punk but that really doesn't do them justice. They had the guitars, they had the energy and the speed, but their melodies were just that cut above the usual offerings.

Their first album, Goosefair, released in 1996 on Mantra featured a stonking version of Wuthering Heights (originally released on Fierce Panda), and the promotion of this album saw them touring the world with Green Day, Leatherface, Doughboys, Ash to name but a few, as well as numerous dates on their own.

Their follow up album followed the traditional "difficult" second album path. Self Made Maniac saw them throttle down the pace, and focus on the songs. Highlights include the single Fictions of Life, Another Toy, and the genuinely menacing 60 Seconds.

Steve Lamacq was a fan, as were John Peel and Phil Jupitus; indeed there was strong Radio 1 support for them for a while in the late 90s. The turn of the century saw them release their final album, Diskin (released as The Drum). The writing must have been on the wall, as this album ended up being the album that THEY wanted to write, and soon after they were dropped by Mantra and the band split up.

Self Made Maniac:
Fictions of Life,
Another Toy,
60 Seconds.