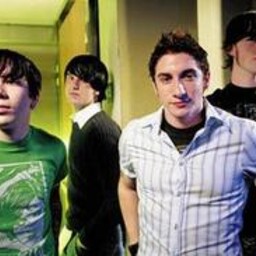 Count the Stars was a four piece rock band by ways of Albany, New York. Chris Kasarjian (guitar/vocals), Dave Shapiro (drums), Adam Manning (guitar), and Clarke Foley (bass) brought the rock and energy back onto the scene with their catchy songs and irresistable on-stage charisma. As a young band they believed in the somewhat dying do-it-yourself ethic, recruiting themselves to malls and local shows to promote themselves. They also recorded, as an unsigned band, the disc "Another Useless Night" and booked their own successful cross country tours. While their respectable DIY work was phenomenal, their solid tunes and indescribable live shows had labels both big and small competing to sign them, and they finally hopped on to the Chicago based Victory Records family.

From there, they released their first CD as a signed band titled "Never Be Taken Alive." The twelve, almost annoyingly catchy songs, became constantly played by both new and old fans alike. However, those who have ever seen them live know that you have not truly experienced Count the Stars until you have seen them in concert. As a result, they worked hard traveling non stop for months across the country on the Vans Warped Tour and with bands such as Taking Back Sunday, The Early November, Fall Out Boy, and more.

However, their touring came to an abrupt stop when they were in a van accident in September 2003. Still holding on to their strong hard working ethics, they tried to heal their physical, mental, and monetary wounds quickly so they could continue touring and meeting new and old friends. To their fans' delight, they got back up on their feet and embarked on a full US tour in November. Unfortunetly, they may have jumped the gun. To the shock of their fans, they broke up suddenly on November 30, 2003 in the middle of their tour with The Early November, Copeland, and Hidden in Plain View. While many speculated what caused the break up, the band made it clear that they would cease from pointing fingers or giving out specific details. Still, many fans hold on to the fond memories they shared with the four young musicians and the music they created.

Currently, Clarke Foley and Adam Manning are working together in the band Action Action.

Clarke and Chris have started a project called the Breathing Club. http://www.myspace.com/thebreathingclub Read more on Last.fm. User-contributed text is available under the Creative Commons By-SA License; additional terms may apply.

Day At The Fair