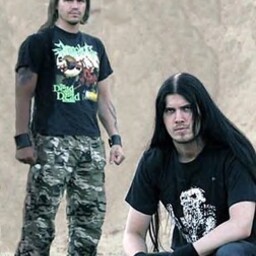 1.) The original Dominion was a moniker for Andrew Szava-Kovats who created electro-industrial music.
He was also founder leader of DATA BANK-A.

Also appeared on several compilations from '86-'98.

2.) Dominion was groovy doom metal band from UK. Formerly known as Blasphemer, it featured a track with Aaron of My Dying Bride on its first album.
The band split up after their label Peaceville tried to turn them into a dance band. Guitar player Christiano currently works on his fathers pig farm in Malta.
Releases:
1996 - Interface
1997 - Blackout
2006 - Treshold - a retrospective {Compilation}

3.) Dominion is brutal death from Sweden, the current line up is Victor Brandt - Vocals and Guitar and Jocke Olofsson - Drums.
The debute album “Born God and Aware” (artwork by Per Olofsson) is unleashed in 2006 and takes brutality to new extremes!
Victor Brandts sickening abuse of strings and zombiefied growls along with Jocke O’s blast-o-rama is a total show of extreme and fast deathmetal combined with superior technique and catchy riffs!

5.) Dominion is a Thrash-metal band from The Netherlands.

6) Dominion is an alias for progressive house DJ and electronic music artist Nigel Dawson, who had several releases on the Whoop! label in the late 90s and early 00s, including "11 Hours", "Ultraviolet", "Fortunes", "Lost Without You" and "The Gate", which appeared on several compilations and mix cds, but now seems to have vanished

8) Taken from their myspace.
"Dominion is a goth rock band, from Manila, the Philippines. cited as one of Asia's more relevant & longer running goth rock bands to date.

Although western rock influences are evident in the band's look and sound ; Dominion are believed to have uniquely injected eastern chord structures & authentic filipino symbolism & instrumentation in their brand of songwriting identitiy,

Their song "Luksa" is proof of this, considered the first tagalog "goth" song of it's kind. although some band members are non-filipinos ; the band has maintained this concept and ideology.

Formed in 1994, the band was a vehicle to deliver originally written music in the gothic rock vein to the unsuspecting local filipino underground.

Influential enough to be covered by national TV and print media,their album "Hand of cain" although not a commercially successful release is regarded as an important relic that has cemented the road for later bands to follow.

Many fans of underground music credit them to have pioneered the spread of goth music in the Philippines since the early nineties.

"This is a definite for any fan of The Sisters of mercy, The Mission Uk, The Cure, 69 eyes and Him" -Gerard Bumanglag , MyGothicheart.com "

9) Dominion (PackFM, Mr. Mecca, and Substantial) is a Hip Hop group with artists from New York and Maryland that has been working together since the 1990's. They've yet to release an album or mixtape, but have been working towards officially releasing new material in 2010. For more information: www.QN5.com

Magik 2: Story of the Fall

Magik 2 - Story Of The Fall