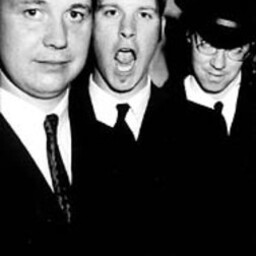 Consisting of original members Pat Banister (guitar, vocals) David Dudley (drums) and Tom Stewart (bass, vocals) and sometimes joined by Marty Jones, Furnaceface were mainstays of the Ottawa music scenes for years following their formation in 1986, after folding up their previous incarnation as a weirdo garage band, Fluid Waffle.

Touring constantly in one of the stinkiest band vans of all time brought them a solid following in Canada.

They are also known for the creation of Furnacefest, a summer concert in Ottawa featuring independent bands being given a chance to play venues usually reserved for much more famous bands.

Although not officially broken up, they have been in an extended state of hibernation since the start of this decade. Hints continue that a new album might still be released. Read more on Last.fm. User-contributed text is available under the Creative Commons By-SA License; additional terms may apply.

This Will Make You Happy

And The Days Are Short Again...

Unsafe at Any Speed