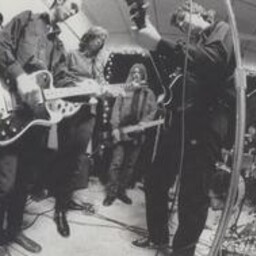 Guided by Voices is an indie rock band which formed in Dayton, Ohio, United States in 1983. The band's lineup has changed constantly throughout the band's history, with its only constant member being singer/songwriter Robert Pollard. The last lineup of the band is identical to that of its 1993-1996 lineup: Robert Pollard (vocals, guitar), Tobin Sprout (guitar), Mitch Mitchell (guitar), Greg Demos (bass) and Kevin Fennell (drums).

Noted at first for its lo-fi aesthetic and typically Portastudio four-tracks-to-cassette production methods, Guided by Voices' music revealed influences from post-British Invasion garage rock, psychedelic rock, progressive rock, punk rock and post-punk. The band also garnered much attention for its prolific output, with a seemingly endless stream of releases. Most songs are in the two-minute range, but many are even shorter; often they end abruptly or are intertwined with odd and homemade sound effects.

Formed in Dayton, Ohio in the early 1980s, Guided by Voices began their career as a bar band working the local scene. As lineups and day-jobs shifted, however, Pollard moved the band towards a studio-only orientation. Guided by Voices' recording career began with a stream of self-financed, independent releases. With only a few hundred copies of each album being pressed, these tended to circulate only among the band members' family and friends.

With the release of the ultra-limited album Propeller in 1992 (of which only 500 copies were pressed, each with a unique, handmade cover), Guided by Voices for the first time gained some recognition outside of their hometown. This was due in part to gaining fans in the college rock circuit and bands such as Sonic Youth, R.E.M. and The Breeders. New York City and Philadelphia were host to Guided by Voices' return to the live stage (and first shows outside of Ohio) in 1993. At this time, the always-fluid Guided by Voices lineup coalesced around the core of Pollard, guitarists Tobin Sprout and Mitch Mitchell (not to be confused with Jimi Hendrix's drummer), bassist Dan Toohey, and drummer Kevin Fennell. Sprout, who was briefly featured in an early-'80s version of the band, had re-joined circa Propeller and soon became Pollard's primary musical foil, in addition to contributing several of his own songs to the band's catalog. 1993 also saw the release of Vampire on Titus, as well as the Fast Japanese Spin Cycle and Static Airplane Jive EPs. Over the next year, the band began to receive national media exposure from sources such as Spin magazine.

In 1994, after culling both new songs and reams of archival recordings from GBV's history, Pollard delivered the indie landmark Bee Thousand via Scat Records, with a distribution deal through indie label Matador Records. Soon, the band officially signed with Matador, concurrent with Pollard and his bandmates finally retiring from their day jobs to work in music full-time. The band surprised early audiences accustomed to the generally shambling, lo-fi and collage-like quality of the records with their energetic live show, featuring Pollard's homegrown rock theatrics (consisting of karate-kicks, leaps, and Roger Daltrey-inspired mic-twirling), Mitch Mitchell's windmilling and chain smoking, sometime bassist Greg Demos' striped pants, a never-ending barrage of tunes that all seemed to clock in under 90 seconds, and prodigious alcohol consumption all around.

Their true Matador debut came in 1995 with Alien Lanes, which, despite a five-figure recording allowance, was constructed out of home-recorded snippets on the cheap. The band's underground following continued to grow, with notices coming from mainstream sources such as MTV and Rolling Stone. After sessions for a concept album entitled The Power of Suck were aborted, the band assembled Under the Bushes Under the Stars out of their first 24-track studio sessions, recorded with Kim Deal and Steve Albini among others, in 1996. However, the strain of heavy touring would ultimately lead to the demise of the "classic lineup", with Sprout deciding to retire from the road in order to focus on raising his first child, his painting, and his solo musical career. Sprout and Pollard marked the occasion by releasing simultaneous solo albums on the same day in 1996: Sprout's Carnival Boy and Pollard's Not in My Airforce, with each making a guest appearance on the other's album. Pollard maintained an active, parallel solo and side project career alongside GBV releases for the remainder of that band's existence. These records were primarily self-released. Because GBV alumni were regularly featured, and songs from these albums were frequently included in GBV setlists, they are informally considered to be part of the GBV canon. Also in 1995, the band contributed the song "Sensational Gravity Boy" to the AIDS benefit album Red Hot + Bothered produced by the Red Hot Organization.

Pollard created a new incarnation of Guided by Voices with Cleveland glam rockers Cobra Verde in 1997. The following album Mag Earwhig!, combined a new hard-rocking swagger with classic lo-fi fragments and one track, "Jane of the Waking Universe", that featured the classic lineup for one last time. However, after another year of rigorous touring, the "Guided by Verde" lineup split in late 1997 following Pollard's announcement in an interview that he intended to work with other musicians on the next Guided by Voices project.

Cobra Verde's Doug Gillard was tapped for yet another new Guided by Voices lineup in 1998, which also included "classic"-era bassist Greg Demos, former Breeders drummer Jim Macpherson, and eventually, former Amps/Breeders guitarist Nate Farley. Departing from Matador, this lineup (without Farley) worked with producer Ric Ocasek to create what was intended to be Guided by Voices' major label debut. Initially produced for Capitol Records, Do the Collapse was repeatedly delayed and finally released in mid-1999 on pseudo-indie label TVT. (In the UK it was released on Creation Records). Featuring a slick, heavily processed sound previously foreign to GBV albums, Do the Collapse failed to catch on at radio, and was for the most part greeted with mixed reviews.

Through touring heavily throughout 1999 and 2000, Guided by Voices' live act became legendary, with shows often stretching past the three-hour mark, and populated by an endless stream of new and classic songs, Pollard solo tracks, impromptu covers of The Who, David Bowie and The Rolling Stones, all accompanied by continuous alcohol consumption. In addition to multiple swings through the United States and Europe, 2000 saw the band's first and only visits to Australia and Japan. 2000 was capped with the release of the massive Suitcase, a four-disc, 100-song trawl through three decades worth of Pollard's enormous reserve of unreleased material. (Two more box sets of unreleased songs, Suitcase 2 and Suitcase 3, were released in October 2005 and November 2009, respectively.)

2001's Isolation Drills was recorded with Rob Schnapf, who aimed to capture the band's live sound more closely than did Ocasek. Though the album debuted in Billboard's top 200 and received higher critical notices than its predecessor, it did not achieve the sought-after radio breakthrough.

After departing from TVT in 2002, Guided by Voices returned to Matador and released Universal Truths and Cycles, a departure from the previous two radio-aspiring albums, and a return to the band's mid-90's, mid-fi aesthetic. Universal Truths producer Todd Tobias would also record the band's final two albums for Matador. 2003 saw the release of the prog-styled Earthquake Glue, followed by the anthology box set Hardcore UFOs: Revelations, Epiphanies and Fast Food in the Western Hemisphere and the greatest hits compilation Best of Guided by Voices: Human Amusements at Hourly Rates.

In 2004, Pollard announced he was disbanding Guided by Voices following the release of the Half-Smiles of the Decomposed LP, and a final farewell tour.

On November 9, 2004 Guided by Voices performed on the stage of Austin City Limits, broadcast by PBS on January 22, 2005. Their last television appearance was on Late Night with Conan O'Brien on December 2, 2004. They played the single, "Everybody Thinks I'm a Raincloud (When I'm Not Looking)". After a select round of final US shows, Guided by Voices played their final show at The Metro in Chicago on December 31, 2004. The four hour, 63-song marathon finale is documented on the DVD The Electrifying Conclusion

In June 2010, Matador Records announced that the "Classic '93-'96 Lineup" would reunite to perform at the label's 21st Anniversary celebration in Las Vegas, in October of that year. A full reunion tour was subsequently announced, with the band selling out nearly every date. The tour included stops at Hoboken's Maxwell's and the Southgate House in Newport, Kentucky, two venues that the band had built a history with due to legendary shows there in the past. When asked by Spinner if there might ever be another proper GBV record Pollard said "I've thought about it sometimes but it's a very long shot," he says. "We all kind of do our own thing. I'm not completely eliminating the possibility."

The band played their "last ever" performance at North Carolina's Hopscotch Music Festival in September 2011, however later that month the band announced that they would be releasing a new album, Let's Go Eat the Factory on 1 January 2012. The band released a second post-reformation LP, Class Clown Spots a UFO, on June 12, 2012. A third, The Bears for Lunch, followed in November. Another album, English Little League, was released in 2013. In a July 2013 interview with Magnet Magazine, Pollard stated that English Little League could be the final GBV album. However, in September, a fifth reunion record, Motivational Jumpsuit, was confirmed for release on Guided By Voices Inc. and Fire Records in February 2014. A sixth reunion album, Cool Planet, has also been announced for May 19, 2014.

On September 18th, 2014, GBV released a statement on Facebook that they had once again disbanded. Read more on Last.fm. User-contributed text is available under the Creative Commons By-SA License; additional terms may apply.

The Best of Guided By Voices: Human Amusements At Hourly Rates

Under the Bushes Under the Stars

Half Smiles of the Decomposed

King Shit And The Golden Boys