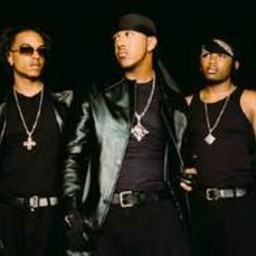 What’s in a name? In the case of IMx, plenty, for IMx is Immature reborn. Batman, Romeo, and LDB, together since childhood, are children no more, and with the coming of manhood comes a dramatic change of name. What hasn’t changed, however, is the vocal trio’s razor-sharp musical instincts.

All words that aptly describe IMx. Formerly known as Immature, the trio of Batman, Romeo, and LDB announce their return with a new album and a new set of standards. The self-titled album is their strongest and most creative effort yet, and showcases the group's development and diversity as artists. IMx is saturated with a varied mix of solid uptempto jams and soulful ballads, a true testament to IMx's talent and growth.
"There's a lot of things we're showing off on this record," says a confident Batman. "We're showing that we can really sing and that we've grown as artists and as individuals. It's also important to us for people to see that we can get together and collectively write and produce, and that we have several strengths as a group."


IMx is a deeply personal album that showcases the threesome's effortless vocal ability and taps their softer side with songs like "Beautiful" and "Tears." A poignant moment on the album comes with "First Time," a touching song that is dedicated to that special someone that everyone has, their "first." "LDB thought of this concept," Batman explains. "So many people have been there and remember the experience, and although it is a really personal subject, we wanted to write about something that everyone could feel and relate to."

Another single, entitled "Clap Your Hands," is, as LDB explains, "a booty-shaking g-string song. It's kinda edgy but still fun because everybody can relate to it." Based on the universally known schoolyard rhyme of the same name, "Clap Your Hands" not only asks you if you're happy -- but if you want to get naughty. Other tracks including "Hate the Playa" and "Ain't No Need" are hopping party anthems that guarantee packed dance floors nationwide.


At the young age of 18, the members of IMx are already showbiz veterans with 10 years under their belt. The group first formed in 1991 when Chris Stokes, a young manager with an eye for fresh talent, saw Romeo rapping at a local youth center. In 1992, the group, then named Immature, released On Our Worst Behavior, followed by the wildly successful Playtime Is Over, which included the hits "never lie," and "Constantly." We Got It soon followed before the band changed their name and released The Journey, featuring the certified gold single "Stay the Night."

Being in a popular R&B group who has sold an estimated seven million records and gone on tours with the likes of Brandy, the Notorious B.I.G., and Soul 4 Real would be enough for most recent high school graduates -- but not for the men of IMx. They have spent a great deal of time honing their skills behind the board in the studio, something they are all very enthusiastic about. In addition to writing and producing all but one song on IMx, they have also produced tracks for other chart-topping artists such as Destiny's Child and Blaque.


In addition to IMx's great success within the world of music, they have all ventured into the realm of acting for film and television. Batman was the first to pursue an acting career, landing a recurring role on the new syndicated hit television series, Sister, Sister. The entire group appeared in House Party 3 alongside TLC and Kid'N'Play, and has recently starred in New Line Cinema's House Party 4.

For the critics who thought Immature were just a kiddie group with little hope of, well, maturity, Batman counters that notion with a sly chuckle. "They'll soon see," he says assuredly. "I think this album is really self-explanatory. They'll feel the change once they hear the album. The songs on the album talk about what young men go through, as opposed to little boys. Everyone will be able to recognize that we have all grown up and matured and are here to stay."

The past was Immature and though the future is unknown, the present is a sure thing . . . it's IMx.


The group released four albums under the name Immature: On Our Worst Behavior (1992) (which included former member Don "Half Pint" Santos, later replaced by Kessee), Playtyme Is Over (1994), We Got It (1995) and The Journey (1997). In 1999, the group underwent a name change and continued on to release two albums under the name IMx: Introducing IMx (1999) and IMx (2001) and released the Greatist Hits album in 2001. The group also branched out into film (such as House Party 4: Down to the Last Minute) and television (such as A Different World) before disbanding in 2002.

In 2002, the group disbanded. Houston and Jones (under the name Young Rome) began solo careers, while Kessee continued his work as a record producer. Houston became the first former member to release a solo album, MH, in 2003. Jones followed suit with the release of his debut solo album in 2004, entitled Food for Thought. Houston continued on to release two more albums: Naked (2005) and Veteran (2007).

Houston and Jones have also pursued acting careers, with both starring in the dance film, You Got Served (2004) and Houston starring in UPN's comedy Cuts and the horror film Somebody Help Me (2007).
Read more on Last.fm. User-contributed text is available under the Creative Commons By-SA License; additional terms may apply.

All About the Benjamins

Straight To The Room 5