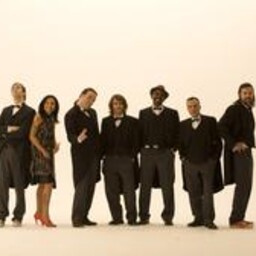 Pau Donés, born in Aragon and raised in Barcelona, worked for various groups before being able to take on his current project, Jarabe de Palo. He began at age 15 with his brother Marc, with whom he formed a group known as J.& Co.Band and later another one named Dentaduras Postizas. During this period he completed his musical tracks in Barcelona with a job at an advertising firm.

His greatest success came to him after a trip to Cuba, where he was inspired to write La Flaca which became the title of his first album in 1996. A year later came the big surprise: millions of albums were sold around the world, and "La Flaca" became the song of the summer in 1997.

After this great success on his first album, Pau was determined to show that the band would not be a one-hit wonder, and with this idea he launched Depende (1998), which was produced by Joe Dworniak in Moody Studios in London over a period of two months. This album featured collaborations with the likes of Ketama and continued with Jarabe de Palo's ironic and ingenious lyrics, which managed to connect with the Hispanic public and even made inroads among Italians.

In 2001 they released De vuelta y vuelta, their most conceptual album. It showed a change in the band with the first music video of the album, in which Pau appears shaving his head, shedding his long-haired features. This album featured collaborations with the likes of Antonio Vega, Jovanotti, Vico C and Celia Cruz.

In 2003 the band tried to show a change to more positive songs with their album Bonito, which featured the likes of Los Mártires del Compás, the singer-songwriter Elena Andujar and their Italian friend Jovanotti.

In autumn of 2004 the band announced that they would go on tour with their new album, 1 m2 (Un metro cuadrado (A Square Meter)) featuring the likes of Jorge Drexler, Lucrecia, and Chrissie Hynde (The Pretenders).

Jarabe is a syrup, and is usually used when talking about medicine (cough syrup is jarabe de tos). Palo is a stick. The expression means to "cure" someone by giving them a beating - e.g. saying that a child who is acting up needs jarabe de palo.

Be warned though: "Jarabe de Palo" is a basically neutral phrase in Spain, but kind of a dirty phrase in parts of Latin America (referring to semen). Read more on Last.fm. User-contributed text is available under the Creative Commons By-SA License; additional terms may apply.