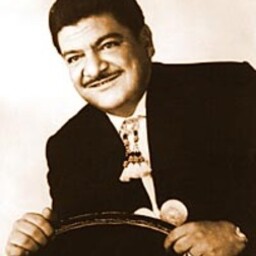 José Alfredo Jiménez (born in Dolores Hidalgo, Guanajuato, Mexico on 9 January 1926 - died 23 November 1973 in Mexico City, Mexico) was a legendary Mexican singer-songwriter in the ranchera style. His songs are considered part of the Mexican musical heritage and comparable, for instance, to what Woody Guthrie meant to American folk music.

The restaurant where he worked as a young man, "La Sirena" was frequented by Andres Huesca, who heard some of his compositions of the then young singer, among which was "Cuando el Destino" and "Yo". Huesca immediately decided to record this and following this in 1948 for the first time on the radio station XEX-AM and months after the XEW-AM, which was catapulted to fame. He married Paloma Gálvez and had two children, José Alfredo and Paloma.

He had no musical training—according to the singer Miguel Aceves Mejía, Jiménez didn't play an instrument and didn't even know the Spanish terms for "waltz" and "key". Nonetheless he composed more than 1000 songs. Among the most famous are "Ella", "Media Vuelta", "El Rey", "El Jinete", "Si Nos Dejan", "Amanecí Entre Tus Brazos", "Cuando el Destino", "El Caballo Blanco", "Llegó Borracho el Borracho" and "Que Te Vaya Bonito", as well as "Camino de Guanajuato", where he sang about his home State of Guanajuato as well as his home town of Dolores Hidalgo Guanajuato.

In addition to his own hit recordings, many of his songs have been recorded successfully by recording artists around the Spanish-speaking world, most notably by Pedro Infante, Rocío Durcal, Javier Solís, Pedro Fernández, Jorge Negrete, Vikki Carr, Luis Miguel, Lola Beltrán, Lucha Villa, Vicente Fernández and by Spaniards Julio Iglesias, Joaquín Sabina and Manolo García.

Jiménez passed at a young age, like others of his contemporaries: Negrete, Infante and Solís, the so-called "Three Mexican Roosters", or Tres Gallos Mexicanos all died young. He was struck-down by hepatitis at age 47 and is regarded, along with Agustín Lara and Juan Gabriel, as one of the best songwriters that Mexico has ever produced. He was certainly one of the most prolific composers in the history of popular music, world-wide.

Shortly before his death, he wrote and recorded his last song, "Gracias", thanking the public for all of the affection they had shown him. His tomb has become a place of pilgrimage for serious music fans from around the Spanish-speaking world. Read more on Last.fm. User-contributed text is available under the Creative Commons By-SA License; additional terms may apply.

The Best of JosÃ© Alfredo JimÃ©nez