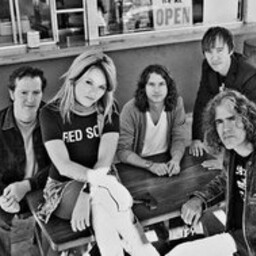 Letters to Cleo were an alternative rock band from Boston, Massachusetts (although they originally started out as a ska band). The band was made up of members Michael Eisenstein, Kay Hanley, Stacy Jones, Greg McKenna, Scott Riebling, and Tom Polce. Their name came from the fact that Hanley had a pen pal named Cleo when she was younger, although the letters she wrote would often be returned. Hanley kept them in a box under her bed marked "Letters to Cleo", and happened to stumble across the box as the band was attempting to think of a name for itself.

The band was formed in 1990 by Greg Mckenna and Kay Hanley, from ashes of their former band, Rebbecca Lula. After numerous member changes, the classic Letters to Cleo line-up was solidified. They included Hanley and Mckenna, Mike Eisenstein on guitar, Stacy Jones on drums and Scott Riebling on bass. After years of playing the Boston club circuit, including TT The Bears Place and The Rathskellar, Letters released their first full length record, Aurora Gory Alice on CherryDisc in 1993.

The album received extensive airplay around the region and after a much hyped show at South by Southwest in Austin, Letters to Cleo signed a major label record deal with Giant Records and Aurora Gory Alice was re-released worldwide.

They had their first big hit single with "Here & Now" and the song would later appear on the Melrose Place soundtrack, where it got most of its exposure. The song reached #2 on the Billboard Modern Rock Singles chart. Appearances on Conan O'Brien and Jon Stewart followed.

In 1995, Wholesale Meats and Fish was released and followed by extensive tours with Our Lady Peace, Sponge, Ned's Atomic Dustbin and others. The single "Awake" was released and achieved moderate rotation on alternative radio. The band also recorded a cover of The Cars song "The Dangerous Type" for the major motion picture, The Craft.

1998 saw the release of some early demos and B-sides in the form of the "Sister" EP on Wicked Disc.

Letters to Cleo appeared in the film 10 Things I Hate about You in 1999 (one of the characters considers them a favorite band). They contributed three songs to the soundtrack for the film, including one original track, "Come On", a Cheap Trick cover ("I Want You to Want Me") and a Nick Lowe cover ("Cruel to Be Kind"). Whereas the covers appeared on the film's sountrack, "Come On" did not. It was released as an MP3 downloadable from the Band's website. During that same year, LTC opened for Cheap Trick at The Paradise club in Boston.

The band played its last show on May 4, 2000, a benefit for their friend and longtime local supporter, Mikey D. They announced their disbandment in the Boston Globe the following month. Most of the band members are now involved in solo careers. Most notable is Kay Hanley's career, which produced the album "Cherry Marmalade in 2002 and the EP The Babydoll EP in 2004. Hanley also provided the singing voice for the Josie character in the 2001 motion picture Josie and the Pussycats.

Scott Riebling went into the production side of music and is now a highly sought after producer and engineer.

Co-founding member Greg McKenna is currently finishing work on his solo project, Murder Capitol of the World. The debut album is due in 2007. Read more on Last.fm. User-contributed text is available under the Creative Commons By-SA License; additional terms may apply.

10 Things I Hate About You

Music From the Motion Picture "The Craft"

When Did We Do That?