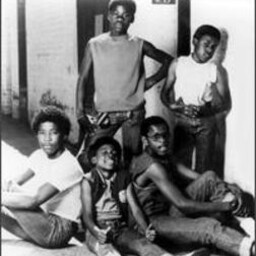 Musical Youth formed in 1979 at Duddeston Manor School, Birmingham, England. This pop / reggae influenced group, featured two sets of brothers, Kelvin and Michael Grant, plus Junior and Patrick Waite. The latter pair's father, Frederick Waite, was a former member of Jamaican group The Techniques, and sang lead with Junior at the start of the group's career in the late 1970s.

Bio:
Although schoolboys, the group managed to secure gigs at certain Birmingham pubs and released a single, "Political" / "Generals", on local label 021 Records. An appearance on BBC disc jockey John Peel's evening show brought further attention to the group, and they were signed to MCA Records.

By that time, founding father Frederick Waite had backed down, to be replaced by Dennis Seaton as lead singer. During the winter of 1982, the group issued one of the fastest-selling singles of the year in "Pass the Dutchie". Based on the Mighty Diamonds "Pass The Kouchie" (a song about cannabis), the title had been subtly altered to feature the patois "dutchie" ,referring to a type of pot used for cooking. This idea is reinforced throughout the political and economic overtones throughout the song about extreme poverty and Musical Youth asking the question "How does it feel when ya got no food?"}. The infectious enthusiasm of the group's performance captured the public's imagination, and duly propelled the record to Number 1 in the UK singles chart. It went on to sell over four million copies, and was nominated for a Grammy Award. A US Top 10 placing also followed. The video made them one of the first black artists to be played on MTV.

The catchy follow-up, "Youth Of Today", reached the UK Top 20, and early in 1983, "Never Gonna Give You Up", climbed to UK Number 6. Minor successes with "Heartbreaker" and "Tell Me Why", were succeeded by a surprise collaboration with Donna Summer on the UK Top 20 hit "Unconditional Love".

A revival of Desmond Dekker's "007" saw them back in the Top 30, but after one final hit with "Sixteen", they fell from commercial grace, and subsequently split up in 1985 when Seaton left the band.

Plans to re-form were initially scotched when Patrick Waite, who had gone on to a career of juvenile crime, died of natural causes (hereditary heart condition) whilst awaiting a court appearance on drug charges. The Grant brothers remained involved in music, while Dennis Seaton released a solo set in 1989, before going on to form his own band, XMY.

In 2001, Musical Youth reformed. They were set to perform at the English ‘Here & Now’ tour, which features performances by many great artists from the 80’s. Due to the 9/11 attacks, the tour was cancelled.

However, by 2003 Musical Youth were back, appearing in a 1980s nostalgia tour. By 2005, now reduced to just a duo of Michael Grant and Dennis Seaton, Musical Youth performed at Wiesen festival in Austria.

On the internet, "Pass the Dutchie" is sometimes mistakenly attributed to Bob Marley.

Similarly, "Pass the Dutchie" is often mistakenly credited as being a Sonic Youth song. Read more on Last.fm. User-contributed text is available under the Creative Commons By-SA License; additional terms may apply.

Pass The Dutchie (On The Left

The Youth of Today