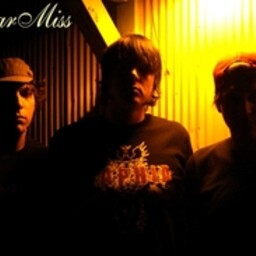 Near Miss - Everything And Everyone
6 дней назад 152 (не задано)

Jeremy Hernandez and Max Bechard moved to Austin, Texas in fall 2001 to create a new musical outlet for Jeremy's songwriting and Maxís passion for music. They teamed up with Myke Bingham and Sean Cockrell to form NearMiss in winter of 2002. Inspired by Fugazi, Minor Threat, Quicksand, and Faith No More, NearMiss carefully crafts their punk melodic hard-core sound by filling it out with vocal harmonies, crunchy guitar riffs and amazing punk rock drumming.

The 4 piece took a do-it-yourself approach to the business and set out touring across the US and Canada. With the help from some friends and the support of their new fans they found themselves headlining and sharing stages with bands such as Sum41, Gob, The Vandals, Goldfinger, Story Of The Year, Yellowcard, Mest, The Distillers and Down By Law.

Their hard work paid off and the Austin based NearMiss was welcomed into Fearless Records based in Orange County, California. Their freshman album The Gentle Art Of Making Enemies debuted in July 2002 and has sold over 7,000 copies to date. The album was quickly championed by Austin's Modern Rock 101X, where the band remains a station favorite. The year also brought a change in line up when they lost Sean whom has yet to be replaced.

Throughout 2003 and 2004 the band continued to tour aggressively and made their first appearance on the Vans Warped Tour. Their hearting pounding performances earned the guys a spot on the 2004 warped compilation which pressed and distributed over 500,000 copies in the US and Canada.

Now a part of Takeover Records Family the band's potential is limitless and holds a promising future in 2005. Their first release is a 3 way split featuring The Matches (Epitaph) and Reeve Oliver (The Militia Group) in stores everywhere June 28th. Also except the bandís sophomore full length which is slated for release in this fall. NearMiss will be on the road the remainder of the year, so look for them on this summer's Warped Tour and other national tours including Story of the Year and Goldfinger.
Read more on Last.fm. User-contributed text is available under the Creative Commons By-SA License; additional terms may apply.

The Gentle Art Of Making Enemies

Boys On Top: A Punk Rock Tribute to Avril Lavigne

Testing The Ends of What They'll Put Up With

Testing the Ends of What They'll Put Up