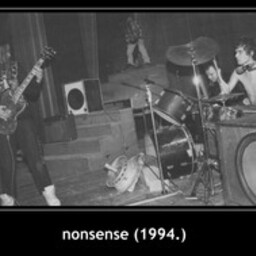 There are several bands known as Nonsense:

1) Nonsense is Croatian band, hailing from city of Požega. Their works include noisecore, thrash, hardcore, punk and grind influences. The story of Nonsense goes like this:

First gera, kktz and chucha recorded 3 reh/demos which are now lost. at 1994 gera - guitar + vocals and kktz - drums + vocals recorded and released diy demo tape "always against". also appeared on some underground compilation tapes and "chards of civilisation" compilation 7''. started as chaotic noisecore going noise/grind, at "always against" including traditional balkan hardcore influence and at the same time being one of the first croatian bands with crusty punk sound. after few live shows band stopped to play, giving place to many later crust hc grind bands from pozega. decade or so later "always against" is re-released as diy cdr and still available by smell the stench in australia. After years of silence, they're back with new demos...check the 2008 demos at www.myspace.com/nonsensefuckingnonsense

new NONSENSE with new recordings coming soon! no life style politically correct nor fascist crap, we don't care about today's gimmicks and trends. be yourself.

2) Nonsense is a French hardcore band and describe their music as 'Fast, brutal, intense and genuine". Starting with 98' Demo, Nonsense played a lot of concerts and finally they recorded first album in 2000 entitled simply "Nonsense". They have already played with Defdump, D.R.I., JetSex, Misconduct or Stretch Arm Strong. In 2004 "Burning Inside" was released (still independent) showing more complex recordings but still with hardcore influences. Their newest album, "Silent Shout" (2005) contains only 4 tracks, but only via internet.

3) Nonsense is a thrash/death metal band from the small island of Mauritius. Their music lies between pantera, sepultura and opeth. They recorded a demo with two tracks: Schizophrenia and a cover of sepultura's roots bloody roots. After band members left the country for their tertiary studies the future of the band has been unclear since 2007.

4) Nonsense is the OC CA punk band. They existed from 1990 to 2002 with the Bane bros in the band the whole time. They played thousands of shows and had a bit of a following. They made waves with their t-shirts "gwen stephani rapes dogs" and "save water, kill yourself".

The Harder, The Better: Volume Eight