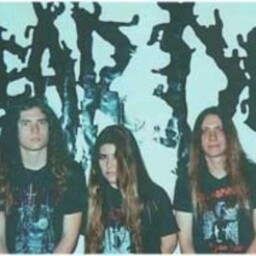 Nuclear Death were formed on March 23, 1986, by Laura Bravo (vocals, bass), Phil Hampton (guitar), and Joel Whitfield (drums). Their first demo, Wake Me When I'm Dead, was released later that same year, receiving positive reviews from American and overseas zines. They were notable as at the time very few thrash metal artists had female singers. Their second demo, Welcome to the Minds of the Morbid, followed in 1987, on the back of which Nuclear Death signed a contract with Richard Campos from Wild Rags, a record label, fanzine and record dealer in California.

In 1991, the band released their more controversial work, entitled Carrion for Worm, containing many songs considered to be in bad taste, such as "The Human Seed", "Lurker in the Closet: A 'Fairy' Tale", and "Greenflies". Carrion for Worm featured vocals by Chris Reifert, singer from popular death metal band Autopsy, on two songs, "Cathedral of Sleep" and "Vampirism".

On May 23, 1992, Nuclear Death played a notorious concert in Puerto Rico, with label partners Impetigo. Later that year they released For Our Dead, a four-track single containing a rerecorded version of 1987's "The Third Antichrist" from Welcome to the Minds of the Morbid.

After the break-up of Nuclear Death, Lori went on to form a new band, Raped, in 2002, and Phil Hampson and Joel Whitfield joined Eroticide. Read more on Last.fm. User-contributed text is available under the Creative Commons By-SA License; additional terms may apply.

Bride of Insect/Carrion for Worm

All Creatures Great and Eaten

Bride of Insect / Carrion for Worm

For Our Dead-All Creatures Great and Eaten

Wake Me When I'm Dead (Demo)

Bride Of Insect - Carrion For Worm

For Our Dead / All Creatures Great and Eaten

Welcome To The Minds Of The Morbid (Demo)

Wake me When I'm Dead