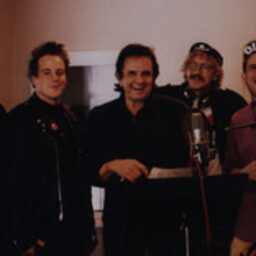 Pig pinatas, silly string, confetti, kiddie pool sized ice cream sundaes topped with marachino cherries, guitar smashing, giant beach balls and skateboard mayhem - all combined with powerful music and most importantly a very powerful message. Not a typical description of your average rock band? Well, it is an average description if you are the band One Bad Pig!

It all started back in 1985 when Carey Womack (lead vocals) and Paul Q-Pek (guitar) and a couple of other friends were on their way from Austin Texas to the Cornerstone Music Festival in Illinois. They stopped to get something to eat in St. Louis at a Pizza Hut that was doing a promotion with local radio station KSHE FM95. Available for purchase were promotional wrap-around sunglasses which featured the radio station mascot: a tough-looking pig wearing a muscle shirt and sunglasses, sporting a Mohawk haircut and earring, holding an electric guitar. Carey exclaimed, "Man, that's one bad pig!" Paul replied, "That sounds like the name of a punk band." The rest of the trip they joked about being in this fictional band and about all of the amazing exploits they had done, were doing, and were about to accomplish.

Their chance to make this joke into a reality came two months later at the Austin Labor Day Music Festival at Zilker Park Hillside Theatre. Paul currently had his own band (The Paul Q-Pek Band) on the roster for the festival, so they decided to get on the bill as One Bad Pig and do a few original songs, and a few cover tunes, complete with a large dose of stage antics. Carey, being the gifted evangelist he is, also interjected passionate "sermons" throughout. After the initial shock, the response was apparently possitive enough for the band to take their brand of craziness to the clubs in town, (The band even sold out of the small run of t-shirts printed up just for that show).

For months prior to this event, Carey and Paul were spending their weekends talking to the kids who hung around the punk clubs, striking up conversations about God. With the success of the Labor Day concert, they decided to go into these same clubs as One Bad Pig, thus giving them some clout with the punk crowd. The early years were filled with extremes. Playing in clubs, the band found acceptance in terms of their music, but as a result of their upfront message, they found themselves the targets for insults, obscenities, spit, beer and bottles. In time the band also ventured into the church venue, but many times found just the opposite dynamic there. The message was well received, but the music style was given to much controversy. This juxtaposition the band found themselves in lead to the title of their first independant recording "A Christian Banned." Nevertheless - armed with their new tunes "hot off the press" they headed back to Cornerstone Festival 1986, this time not as music fans joking about a fictional band, but to play a concert as the very real One Bad Pig. Seasoned with the experiences of the past year, the band gave a performance that created a buzz at the festival. The album sold like leamonade in the Sahara Desert, and the whole supply of records brought was soon going home with their new-found fans.

Over the next year and a half, the band travelled across the country on weekends playing to enthusiastic crowds. Soon word of this crazy foursome that was making waves reached the ears of legend Billy Smiley of the famed band WhiteHeart. Billy was always looking for the next new and different thing. Well WhiteHeart was scheduled to play in Austin. The following is an account by our good friend Lynn Miller Mcrae:

The Quintessential One Bad Pig, Vol. 1

Live: Blow The House Down

Live - Blow the House Down

The Mother of all Tribute Albums

The Quintessential One Bad Pig, Vol.1