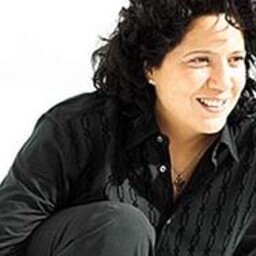 Rosana Arbelo was born in Lanzarote in the Spanish Canary Islands off the northwestern coast of Africa. At age 20, she moved to Madrid where she studied music and guitar.
In 1994, a song she composed won first prize at the Festival de Benidorm. From then on her compositions started to interest many other artists.
In 1996, Rosana decided to start singing her own songs and released her first album, Lunas Rotas. The disc reached unexpected popularity, and without trying she turned into an overnight phenomenon.
Her entry into the Spanish music market was one of the strongest for a new artist in the history of the country. She sold more than 1.6 million copies in Spain, and more than 900,000 in the rest of the world.
Her second album, Luna Nueva, was released in 1998 and had a more mature and deep sound, but maintained the natural and smooth sentiments that characterize the artist.
After three years of silence, during which she wrote songs for other artists, her third album, Rosana, was released in 2001. Its sounds explored the rythms from the her birthplace in the Canary Islands.
In December of 2003, Rosana released Marca Registrada, a double-disc album that contained 10 new songs, 12 greatest hits, and two videos.
Most recently, she has been on tour in both Spain and Latin America, promoting her 2005 album Magia.

Rosana Fiengo is a Brazilian singer who had massive success and a string of hits from the mid-80s to the mid-90s. Her biggest hit was O Amor E O Poder in 1987, and others followed shortly: Direto No Olhar, Onde O Amor Me Leva, Nem Um Toque, Vício Fatal. Her romantic and popular style didn't guarantee her rave reviews, but she did manage to win some awards and she was always featured in many TV shows.
After a while she gained cult status and is still working today, performing at 80s retro parties. Her latest album was released in 2003, and despite containing a remix of O Amor E O Poder, it didn't do well commercially. Her voice has a very wide range and can sometimes be compared to Tina Turner's.

For the 2009 release song "Loving You", she change her stage name to Rosanah Fiengo. Read more on Last.fm. User-contributed text is available under the Creative Commons By-SA License; additional terms may apply.