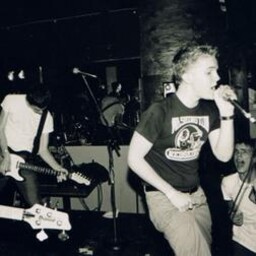 Цитата участников группы об их музыке: - "I was getting into Superchunk, Sunny Day Real Estate, Archers Of Loaf, Jawbreaker …, ” Conley recalls. “We would play as hard and fast as we possibly could without losing the melody."

Saves The Day is a Rock band from Princeton, New Jersey and formed in 1994.

They got together when its members were only 13, signed a label deal while still in high school, and went on to sell thousands of records, tour with blink-182 and Weezer, land songs on the playlist of Los Angeles’ KROQ, and influence countless followers.

Singer-songwriter-guitarist Chris Conley’s lacerating, frequently existential lyrics provide sharp counterpoint to his sweet melodic sensibility as the band exercises their penchant for a variety of rock, punk and pop hooks. In Reverie was produced by Rob Schnapf, who has worked with Saves The Day before, as well as with Beck, Elliott Smith and Guided By Voices.

Precocious from the get-go, Conley took up the cello at six. He had his first real rock ’n’ roll epiphany while sitting in his dad’s Mazda listening over and over on his Discman to the opening drum fill in “Stairway To Heaven.” “That summer I started playing guitar,” he explains. “I was 13. When I got back to school, a friend of mine, who was our drummer for a long time, asked me to come to his house and jam. David played guitar. That was the first incarnation of Saves The Day. We were called Indifference and later, Sefler, which came from an e-mail typo.”

Says Soloway: “We’d play on the street outside Chuck’s Café in Princeton.” “They had great wings,” Conley adds, “which is what they gave us for playing.” As Sefler moved indoors to the school gym and friends’ basements, they began discovering indie rock. “I was getting into Superchunk, Sunny Day Real Estate, Archers Of Loaf, Jawbreaker …, ” Conley recalls. “We would play as hard and fast as we possibly could without losing the melody.”

While recording their first demo, the band changed its name. A musician friend volunteered Saves The Day, a lyric from a song called “Hero” by the band Farside: “I want to be the one who saves the day.”

A small hardcore label heard Saves The Day’s demo and signed them. “It was so weird,” Conley admits. “Senior year starts, and within the first few months, we find out Equal Vision wants to put out our album. We flipped out!” Positive change makes sense for a band that has always had a penchant for evolution. After forming in Princeton, New Jersey in 1997, Saves The Day released its debut album, Can’t Slow Down, in 1998. Most of its songs were written when Conley was 16.

The next key step in the band’s development came with the recruitment of bassist Eben D’Amico. “What clinched me joining,” D’Amico informs, “was when Chris played a demo of Saves The Day’s next album. It just hooked me. I heard limitless potential.”

By June of 1999, the group was recording Through Being Cool. “The record had a much more pop sensibility,” D’Amico elaborates. “Chris had figured out that every song didn’t have to have the same Minor Threat beat.”

The day of the disc’s release, respected indie label Vagrant Records reached out to Saves The Day. “Then all the majors came calling,” Conley says. “But we fell in love with the people at Vagrant. They were so down to earth and simply said, ‘We love what you are and we want to work with you.’"

Before signing with Vagrant, Saves The Day embarked on a lengthy tour. Near La Croix, Wis., the band’s van skidded on a patch of ice. “I remember waking up and hearing Dave scream, ‘Oh my God,’” Conley says. “I could feel the van roll, and I knew I was going to die. We went off the road, spun around, rolled down an embankment and slammed to the ground on the right side. The weight of the force flipped us back up. When we flipped back, David was launched into the windshield, then repelled into the steering wheel. Then everything stopped. The fact that David lived is beyond a miracle.” He did, however, suffer a broken nose and lose most of his teeth. Conley broke his collarbone. Amazingly, the band missed only five shows before rejoining the tour in Seattle.

To record their Vagrant debut, Saves The Day moved into a two-bedroom sublet off L.A.’s Sunset Strip. “We were in the heart of all that is shitty about Los Angeles,” D’Amico explains. “And Dave’s room was literally a walk-in closet.”

These circumstances apparently bred inspiration. Stay What You Are, produced by Schnapf and released in 2001, became STD’s most critically lauded and commercially successful release to date. It landed in the upper half of the Billboard 200 album chart and ultimately sold more than 200,000 copies. It also spawned the highly addictive “At Your Funeral” – which presciently declared, “This song will become the anthem of your underground” – and the nuanced pop gem “Freakish,” the videos for both of which earned heavy rotation on MTV2.

Saves The Day went on to headline the 2001 Vagrant America Tour with Dashboard Confessional. “That was the first time we played before thousands of people who knew every word to all our songs,” says D’Amico. Then they scored a slot on Weezer’s tour. “The show in Charlotte, N.C., was our first arena show,” Conley notes, nonetheless confessing, “I kept having flashbacks to Sefler playing in basements.” Saves The Day next was asked to join the Pop Disaster tour, with Blink-182 and Green Day. “That they actually considered us – let alone asked us – to be on that tour was just incredible,” Conley offers.

The band followed it up with the genre-defining Through Being Cool one year later. 2001’s Stay What You Are elevated Saves The Day to an even greater level of success and critical recognition, followed soon after by 2003’s In Reverie. In Reverie took an exciting sonic leap from Stay What You Are, which itself was a stylistic departure from Through Being Cool. For their follow-up to Stay What You Are, Saves The Day again called on Schnapf. “We just have excellent chemistry with him,” says D’Amico. They began recording in February of 2003 with new drummer Pete Parada. This time they actually enjoyed L.A. Soloway points out: “Every other record felt like we were rushing and struggling to get everything on tape, but this time the recording was a great experience. We got to try different ideas and explore more sounds. Plus, I didn’t have to sleep in a closet.” Each album the band has released has its own distinct style and flair, though they are all undoubtedly Saves The Day through and through.

Reports Conley: “I’d gotten really into Howlin’ Wolf between albums. There’s something about him that’s so pure that it reminds me of punk rock; it’s so stripped down, and it gets right to the point. The Beatles were also a mainstay. I played the White Album and their #1’s disc, with the older pop songs, which are so incredibly well constructed. I was also listening to a lot of Stevie Wonder and David Bowie.”

All of which simmers somewhere among In Reverie’s dozen songs, from the huge guitars and irresistible melody of first radio track “Anywhere With You” to the mercurial “Morning In The Moonlight,” to the infectious “In My Waking Life,” to the poignant acoustic ballad “She.”

Conley says of his songwriting method: “I just pull things out of my head. Melody always comes first, then chords, then lyrics. I search for words that fit the cadence of the song. A lot of people have told me that I’ve put words to every emotion they’ve ever felt, but really, I’m just putting words to my own emotions.”

Asked if moving to a major label carries any baggage for the indie stalwarts, Conley says: “Not really. That whole thing is like being in high school and being terrified that the cool kids won’t like you. We’re comfortable with who we are, and you can’t really ask for more than that.”

Adds Soloway, “I just keep thinking about the fact that we’re not even 25 and we’ve already gotten this far – how did that happen?” D’Amico effectively answers the question, venturing, “This band has done a lot of molting.”

Fast-forward to 2010, and Saves The Day is evolving once again. After the departure of long time member David Soloway in 2008, along with Mannuel Cerrero and Durijah Lang in 2009 (who left the band to focus on former group Glassjaw), Saves The Day hit the road rocking all their classic tunes with a brand new look. Arun Bali, Rodrigo Palma and Claudio Rivera, now join Conley to round out the Saves The Day lineup. It is with these new members that the band will record Daybreak. As Conley explains, “it makes sense that Daybreak features a new lineup, as thematically the album deals with coming back to Life with a renewed appreciation and attitude of perseverance and acceptance.”

Now, with the band ready to release the long-anticipated third part to the trilogy, you get the feeling that a new day is truly breaking for Saves The Day. “Daybreak is both an ending and a new beginning,” says Conley. “Daybreak comes back to Life to say, ‘we are here together and we can make it through.’"

Stay What You Are

The Get Up Kids