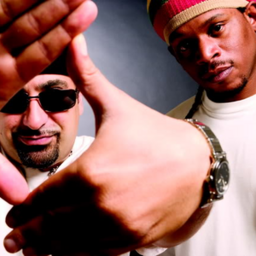 When one has a vision to create something in a way that no one else has, they definitely have a large task at hand. In a day and age where the majority of bands focus their attention on writing a handful of songs to fill up a CD with the hopes of having a "hit single" on their hands, Cleveland, Ohio's Shenoah take a slightly different approach. Founded in the spring of 2003 by former Chimaira guitarist/co-founder Jason Hager, roughly two years after his departure from Chimaira, Hager had ideas that could no longer be contained.

Named after his step-daughter's middle name, which is Native-American for "white dove," Shenoah was nothing more than Hager writing by himself in the studio of friend Cole Martinez of Cleveland's Forever Untouched. Soon after, Hager enlisted an entire band, except for a vocalist. Joining Hager was former Chimaira drummer/co-founder Jason Genaro, bassist Ben Hollowell of Cleveland's Ringworm (Victory Records), Jason Knotek on guitar and Doug Bjornholm on keyboards/samples.

After a while, tension and frustration began to rise due to the lack of vocals, some members were losing interest, others were dealing with personal issues and this pretty much halted progress. Ultimately Knotek and Bjornholm decided to leave the band to focus on personal issues as well as a different path musically. One night Hager was hanging out with friends Erase The Grey (Republic/Universal). After hearing two instrumental versions of Shenoah's songs, it didn't take long for a few members of Erase The Grey to realize that what they heard that night was what they themselves wanted to be doing. One phone call later from ETG's Jon Sayre, Jason Hager and Ben Hollowell found themselves with new members to their band. Vocalist Jon Sayre, guitarist Vincent DiFranco and keyboardist/sampler Jeff Butchko of Erase The Grey were all now members of Shenoah. Almost at the same time all the missing pieces to Shenoah were being replaced, drummer Jason Genaro also made a mutual split with the band. Soon after, drummer Matt Danko was brought in to fill the slot.

With the new additions, who all have the same goal, drive and creative vision, Hager's original plan was going to become a reality. The idea was simple, to write "entire albums," not just a CD full of songs. To have every song fit together and work off of each other to create one giant epic piece. "I want to take all my influences, personal and musical to create something new, something that people who know me wouldn't expect" explains Hager. Hager also states "I want to write albums that are very dynamic and very moody, I'm a very moody person, I can be fine one minute, and then out of nowhere depression can kick in, and vice versa. I want the music to be an emotional wreck just like me." When asked how the bands name fits into this all, Hager said "Shenoah means white dove. The dove is a symbol of peace, something that everyone strives for. Whether peace within themselves, or peace amongst their fellow man, we all want it, but ultimately we find that true peace is never found."

A simple thought once popped into Hager's head that he pretty much felt sums up his life. "Every time I overcome an obstacle, another one rises in its place to try and kill me." This is the same thought that Shenoah's musical structure is based on. "We're going to kick your ass right out of the gate, and just when things seem to have calmed down and lightened up, we're going to kick your ass just a little bit harder until you can't take it anymore" explains Hager.

Shenoah plan to make their mark and put a brand new scar on the face music as well as society itself. They have set their minds on creating something on their own terms without worrying if certain songs are too soft, too heavy or too electronic. "We are going to create music that naturally comes out of us, sounds that are an extension of us. When you hear Shenoah, you're going to know that our music is real, sincere and 100% us" says Hager.

2003 was the year of its birth, and soon enough everyone who listens will agree that this is "The Age Of The White Dove!"

Founders Jason Hager and Ben Hollowell are currently persuing. Vince DiFranco and Matt Danko are now persuing. Sonic Transmissions. We will be posting new tracks that have been previously unreleased for everyone to download within the next couple weeks. Take Care all!


Formed in the Spring of 2003 by former Chimaira guitarist/co-founder Jason Hager, SHENOAH was a way for Hager to explore diffent areas of music. "I've always loved all kinds of music and wanted to explore a slightly different direction with this" explains Hager. .... In Cherokee the word Shenoah means "white dove." Over the years the dove has been seen as a symbol of peace. Whether inner peace or peace among fellow man, just as we think we've found it we find "true" peace is never found. Hager chose the name SHENOAH because it is his step-daughter's middle name and he wanted every aspect of this band to be deep and personal. .... He found the exact same passion and conviction towards the music that he had in former Erase The Grey (Republic/Universal Records) guitarist Vinny DiFranco, former Ringworm (Victory Records) bassist Ben Hollowell, former Chaos Swings (formerly Mad At Gravity, Artist Direct Records) vocalist Rob Montague and drummer Matt Danko. .... As for SHENOAH'S sound, They wanted their songs to be as moody as the individuals in the band. They want to cover a very broad spectrum of their genre. This is very apparent on the band's Corporate Punishment Record's debut "Bleeding In The Red." From the up beat songs "Ashes To Ashes and Telephone Bruises" to the brutal "Bullets And Numbers" and "Scent Of A Dead Rose," SHENOAH prove their ability to jump from one extreme to another without missing a single beat. .... In the short time SHENOAH was together they had made quite an impact on their fans... But in time everything must come to an end. "I loved Shenoah and had a lot of fun with those guys, but I'm a metal guitarist at heart and felt if that wasn't what I was persuing as a full time project I wasn't being true to myself or everyone else." explains Hager. So Hager decided to leave and focused 100% on getting things up and running with his current band YEARS OF FIRE. Shortly there-after Ben decided to leave as well and joined Hager where they both are still carving the name YEARS OF FIRE into the minds of metal fans world wide. .... Vinny is now fronting and playing guitar for the more experimental rock band THE OHIO SKY, Matt is attending the Musician's Institute in Los Angeles and Rob who founded THE OHIO SKY left and is persuing other musical outlets including his solo project, songwriting and producing. Read more on Last.fm. User-contributed text is available under the Creative Commons By-SA License; additional terms may apply.

Bleeding in the Red

Expand The Horizons part 1 by alter-side.com

Bleeding in the Red [EP]

Expand The Horizons part 1 by