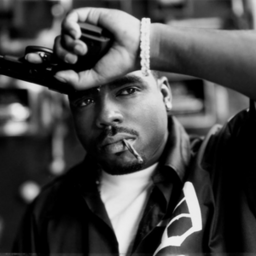 Shooting Gallery was a group of sleaze rockers with a bad attitude, four of five members being in jail at one point in their lives. One album and tour was all this band of misfits could endure before falling apart. Formed by guitarist Andy McCoy who had gained cult status with Hanoi Rocks.
After the demise of Hanoi Rocks, McCoy found himself with a solo contract with Mercury records, a failed band called Cherry Bombz and a heroin addiction. Once he had cleaned himself up he formed a group around singer billy g. bang! (another addict), bassist Dave Tregunna and drummer Paul Garisto (a New Yorker who had played with Iggy Pop among others).
The band was a headache for their label as stories of rampant drug use and fistfights with their producer abounded. However the debut album did get finished and released in 1992 with the first single being a remake of Cherry Bombz' minor hit "House Of Ecstasy". Promotion for the album stated, "if you scrapped all the dirt away, you wouldn't have anything left."
One time Dogs D'amour guitarist Jo Almeida joined the group when they hit the road. But sales were poor and despite releasing a sleaze metal classic they split apart and called it a day. Bang! resurfaced in the Slumlords as billy dragon while McCoy continues to record as a solo artist, or show up where least expected. Read more on Last.fm. User-contributed text is available under the Creative Commons By-SA License; additional terms may apply.

Harley Davidson And The Marlboro Man

Harley Davidson And The Marlbo