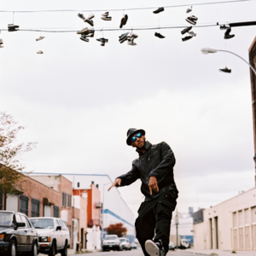 Slaves On Dope - Drag Us Down
месяц назад 196 (не задано)


Slaves on Dope is a Canadian nu metal band, based out of Montreal. The band was formed in the 1993 by Jason Rockman and Avrum Nadigel (original lineup consisted of founders as well as Patrick Francis, Kevin Jardine, and Lenny Vartanian) highly influenced by the grunge era. In 1995, after the departure of bassist Francis & drummer Vartanian, Frank Salvaggio (bass) and Robert Urbani (drums) entered the fray and so began a new heavier direction for the band.

At the time the Canadian music scene had not embraced the "nu metal" scene, so Salvaggio & Urbani decided to make a 6 day trek via Greyhound bus from Montreal to Los Angeles, CA, the epicenter of nu metal, to begin the process of making in-roads, contacts & securing showcases for the band. After a year filled with showcases the band secured a record deal through Ozzy & Sharon Osbourne's Divine Recordings who in turn released their full length album "Inches from the Mainline" in 2000. The band also toured Ozzfest in 2000, and made an appearance on the SnoCore Tour. The album went on to sell approximately 70,000 copies in the US.

After Divine Recordings lost their distribution deal with EMI's Priority Records, the band was left without a label & returned to Montreal. Salvaggio once again returned to Los Angeles, CA with the goal of securing another record deal. With the help of producers Jason Slater & Troy Van Leeuwen, a deal was struck with Bieler Bros. Records. Their second major album "Metafour" was released in 2003.

In March 2004, vocalist Jason Rockman left the band, a move that prompted Slaves on Dope to disband. Bassist Frank Salvaggio and drummer Rob Urbani are now part of the band Anew Revolution, featuring ex-Unloco vocalist Joey Duenas. Kevin Jardine has gone on to become a producer in Montreal, as well as forming his own band called The Monarchy. In 2006, the band's independent release "One Good Turn Deserves Another" was re-issued through Just A Minute Records.

In 2009 Jason and Kevin reformed the band as the only current members and began recording their third studio album. In a YouTube webisode the band announced the name of the album to be "Over the Influence". It was announced on webisode 18 that recording is finished and 17 tracks have been recorded. Jason then stated in a video on the bands Facebook that the album will be released in the Spring of 2011.

In October 2011, it was announced that Slaves on Dope had signed to THC:Music/Rocket Science Ventures, the new label of Corporate Punishment Records President, and early Slaves on Dope manager Thom Hazaert, who will release Over the Influence Worldwide in Spring 2012. They also announced the release of a digital-only EP "Careless Coma" in November 2011. Read more on Last.fm. User-contributed text is available under the Creative Commons By-SA License; additional terms may apply.

Inches From the Mainline

One Good Turn Deserves Another