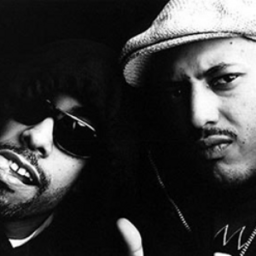 Slick Idiot is a German electronic music band in the industrial music genre.

Slick Idiot was formed by former KMFDM members Günter Schulz and En Esch following the 1999 breakup of KMFDM which was rebirthed as MDFMK, without Esch and other members, before returning to the original KMFDM title in 2002 with a different line up. Before taking on the name Slick Idiot En Esch and Günter Schulz did a cover of Nine Inch Nails' "Terrible Lie" on Cleopatra Records' Covered In Nails 2: A Tribute To Nine Inch Nails. After releasing DickNity for purchase online, Slick Idiot, with core live members Mel Fuher & drummer/programmer Michael J. Carrasquillo, hit the road on a summer tour of North America ("High Life for Low Lives" US Tour 2002). Later, Cleopatra Records re-released DickNity with a bonus remix by Christoph Schneider of Rammstein. In late 2003, En Esch and Günter Schulz joined as members of Pigface for the "United II" tour. In October of 2004 Screwtinized was released online via their website and garnered rave reviews. En Esch toured again with Pigface on the "Free For All" US Tour 2005, while Schulz devoted his time to forming the side project SCHULZ with vocalist Jeff Borden. In 2006, Slick Idiot completed a full US tour called the xSCREWciating Tour with More Machine Than Man (MMTM). The outing saw the addition of live members Gregg Ziemba on drums and Victoria Levy on vocals.

As a tribute to the European Football (Soccer) Tournament taking place this year in Austria and Switzerland and the Austrian capitol city Wien - Slick Idiot is coming back with its own version of one of the most famous traditional Austrian songs ever - "Wien, Du Stadt meiner Traeume" written by Rudolf Sieczynski. This single is available since May the 12th as a digital download only.

Slick Idiot will be touring through the United States in 2009, performing at almost 50 shows in 2 months. The band also released their new album "S U C K S E S S" on September 4, 2009. It is available exclusively at shows on their "In the Flesh" tour, with a commercial release to follow. Read more on Last.fm. User-contributed text is available under the Creative Commons By-SA License; additional terms may apply.

En Esch and Günter Schulz formed Slick Idiot after the temporary breakup of KMFDM in 1999. They carried with them several of the distinctive sounds that made KMFDM one of the leading industrial innovators of the 80's and 90's.

Slick Idiot's music is more than club-worthy, with pulsating beats and swift synthetic sounds, but it also contains a solid industrial metal foundation with thrashing innovation by Günter's unique guitar stylings and En Esch's funky beats and gruff vocals. Add to it, soul, provided by vocalist Erica Dilanjian and the additional programming and live drumming of Gregg Ziemba, and Slick Idiot provides many points of sonic titillation.

Since its inception Slick Idiot has released 3 studio albums ("DickNity", "Screwtinized" and "Sucksess") along with 2 remix albums ("ReDickulous" and "xScrewciating"). The band followed each release with a major U.S. tour and recently completed the "In The Flesh Tour" to promote the new release of "Sucksess", which saw the band play 44 cities from coast to coast. Read more on Last.fm. User-contributed text is available under the Creative Commons By-SA License; additional terms may apply.