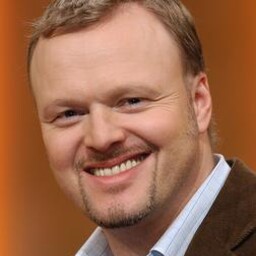 Stefan Raab became popular as the host of the comedy show Vivasion for the German music TV channel VIVA in 1996. Since 1999 he has hosted his own show TV total on the channel ProSieben. While TV total started as a comedy format, it soon turned into a late night show with musical performances, remotely similar to the Tonight Show with Jay Leno. Raab's often sarcastic comments on a number of German celebrities even led to rapper Moses Pelham breaking Raab's nose in 1997.

He wrote the music for the German entry in the Eurovision Song Contest of 1998, Guildo Horn's Guildo hat Euch Lieb, and in the Eurovision Song Contest 2000 he performed himself with the nonsense song Wadde Hadde Dudde Da (What do you have there). Other famous songs include Maschendrahtzaun, Gebt das Hanf frei! (Legalize cannabis, featuring Shaggy) and Wir kiffen (We smoke weed).

Raab cast the German entry for the 2004 Eurovision Song Contest on his show in a competition he called SSDSGPS (Stefan sucht den Super-Grand-Prix-Star, Stefan seeks the super Grand-Prix star). The winner of this casting, Maximilian Mutzke, came in 8th place.

Bored with the Eurovision Song Contest, Raab came up with the Bundesvision Song Contest in 2005 (Germany officially being the Bundesrepublik Deutschland). The contest featured representatives from each of the 16 states of Germany (Bundesländer) and stipulated that their song had to be (at least partly) in German. The first contest in 2005 was won by the band Juli from Hessen, followed by Seeed from Berlin in 2006.

He is an autodidact, playing various instruments, such as piano, drums, guitar, ukulele, bass and some wind instruments.

25 participating countries were intended for the 2000 Eurovision Song Contest, but Greece decided not to participate, so only 24 took part as the European Broadcasting Union did not find a replacement in time for the last spot. Poland, Portugal, Slovenia, Lithuania, Romania and Bosnia & Herzegovina were not allowed to take part due to their bad average scores. Latvia made its debut this year, and the entry My Star performed by the group Brainstorm did really well, finishing in third position. Estonia finished fourth with Ines' Once In A Lifetime which was the bookmaker's favourite. Internet polls also had the United Kingdom and the Netherlands as favourites but these countries only finished 16th and 13th respectively.

13,000 spectators were at the final in the Globen Arena in Stockholm, which was a new record. This record did not last long, though. Already at the Eurovision Song Contest in Copenhagen 2001, the record was exceeded. The Israeli participants caused a stir when members of the group Ping Pong started waving the Syrian flag during their performance. The Netherlands had to use a back-up jury for their votes because of a large fireworks disaster in the city of Enschede, which meant that only half of the song contest was aired live on Dutch television.

Despite the fact that Denmark's song Fly On The Wings Of Love by the Olsen Brothers climbed in the predicted rankings in the week prior to the final, the Scandinavian country was only thought to finish in 18th position. Therefore it came as a huge surprise for many that the charming Olsen Brothers won - and with a large margin to the runner-up, Russia. Fly on the wings of love went on to become a huge hit in Scandinavia and the German-speaking countries. The Russian delegation petitioned the disqualification of the winner, Denmark, because a vocoder had been used to give one of the performers in the Danish duo, Jørgen Olsen, an electronic sound to his voice during one part of their performance.
Facts & figures

For the first time in the history of the Eurovision Song Contest, an official CD was released which included all 24 songs. Since then, CDs with all entries have been released every year.

Disney Film-Hits (The Magic of Disney)