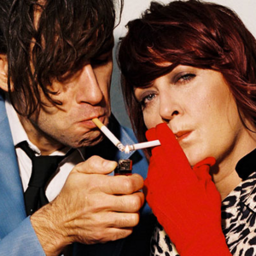 The Berlin duo STEREO TOTAL has created a colourful and fascinating universe. Oscillating between the essential punk rock, disco and electro garage chanson and genious diletantism, the songs dazzle us for an instant (most of them not for longer than two minutes), leaving us stunned by their intensity.

At the beginning of this ever-expanding musical universe (pleasantly enough!): a woman, a man, and an inexhaustible, sparkling imagination. Françoise Cactus, (who was born Van Hove in Burgundy and has chosen Berlin as her home for something like a generation now) a writer, local diva, who has performed, among other things, as drummer and singer of the "Lolitas" in the eighties. Then there is Brezel Göring, an inexplicable mixture of the hyperspeedy "Grand Duduche" and the elegant, unobtrusive crooner, with a soft voice and a lively rhythm. Bent over his synthesizer, happy as a young boy, he reminds one of the hallucinated inventor Géo Trouve-tout.

To sum up STEREO TOTAL's short history, which began with the single "allo j'écoute", let us list the different elements characteristic of their musical art: a minimalistic production (in a positive sense), meaning a home-made-trash-garage-sound crossed with underground, authentic as well as amateurish, ironic as well as effective, pop as well as...political. An untiring creative energy, as if it could never suffice, "Oh, but you haven't heard this one!" and wop! here we go again, hardly leaving time to draw a deep breath. A brilliant sense of composition as well as for covering other's material, whatever the source, combined with an excessive love for French chanson (the main weak spot being an evident admiration for the master Gainsbourg). A mystery of words resulting from the French-German/ male-female bilingualism, words in which accents are merrily blended and become more and more exotic from album to album (Japanese, Turkish, Spanish, English). And finally, an explicit and surprising sensitivity for electronic effects and a thrilling beat. A gift of pop music and its everlasting history.
The unexpected combination of two traditions - French chanson and German electronica (which not only relates to Kraftwerk, but also to the uniquely German sound of "Neue Deutsche Welle", popular in the eighties, and the emergence of electrogroove, a sound which has flourished over the past ten years in numerous clubs in Berlin is again at its best, enchanting its listeners.

Just as the German audience adores Françoise Cactus charming French pronunciation of the German lyrics, her French collection of texts, poetic and playful, solemn and cheeky, anarchistic and light, makes her the most unknown composer and singer of French chansons - and it is high time that she be discovered. Fragile and irresistible, she stands behind her tiny drum kit and hammers the songs to a sequence in a devilish rhythm. In a matter of seconds she passes from a romantic ballad (No! Do not listen! It's a sad song!) to pure and simple rock, animating Brezel Göring (as well as the crowd) to leap. Indefatigable accomplice and perfect entertainer, Brezel Göring is at her side, stepping on the gas, his fingers working the knobs of his machine or the cords of his rectangular guitar. Read more on Last.fm. User-contributed text is available under the Creative Commons By-SA License; additional terms may apply.