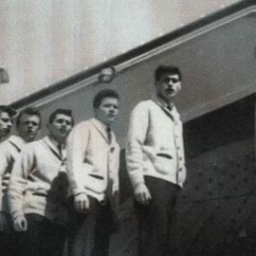 They signed to Mermaid Records, where their revision of Al Jolson’s ‘When The Red, Red Robin, Comes Bob-Bob-Bobbin’ Along’ was coupled with another cover, the Jesters’ ‘Love No One But You’, as their debut single. Encouraged by local airplay, they followed this with a second disc, their version of the Cleftones’ ‘You Baby You’ on the a-side and ‘Coney Island Baby’ on the b-side. It was ‘Coney Island Baby’ (not the barbershop quartet standard) which attracted the attention, reaching number 51. With prominent local concerts and a rising reputation, the Excellents looked set for a promising career until record business skulduggery intervened.

Booked for an appearance on Dick Clark’s American Bandstand television programme, their record company refused to pay their travelling fees. When they learned that the group simply could not afford to travel to Philadelphia, the label instead sent an entirely different group under the same name. Justifiably devastated at this turn of events, the Excellents never recorded again, although a single, ‘Helene’, from their original sessions at Sinclair Records, was released in 1964 credited to the Excellons. Read more on Last.fm. User-contributed text is available under the Creative Commons By-SA License; additional terms may apply.

I Hear A Rhapsody / Why Did You Laugh