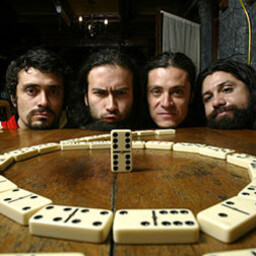 Chancho en Piedra is a Chilean Funk-Rock band, considered influential in the popularization of alternative rock in Latin America. The group's name is taken from a popular Chilean sauce, literally translated as "pig in stone," made with tomatoes, onions, garlic, peppers, salt, cumin, and olive oil, often served in a stone bowl in the shape of a pig.

They are known for their unique sound and goofy style. In 1995 they released their first CD titled "Peor es mascar lauchas, roughly translated to "anything is better than nothing at all," a pre-emptive excuse for those who did not like the album. They actively participate in community-related events, playing benefits for the Chilean National Commission of Scientific and Technological Investigation. They are also known for musical contributions to the popular Chilean children's puppet show 31 Minutos.

Chancho en Piedra has released 11 albums since their debut in 1995, gaining them widespread familiarity, not only in Latin America but internationally as well, allowing them to perform at events such as the Memphis' Beale Street Music Festival in May of 2009.