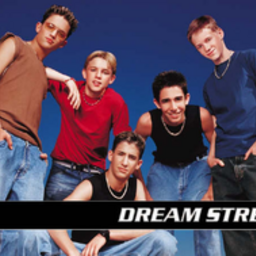 The group was put together by producers Louis Baldonieri and Brian Lukow, and featured five boys from New York: Jesse McCartney, Greg Raposo, Matt Ballinger, Frankie Galasso, and Chris Trousdale. Baldonieri and Lukow hoped to make an impact on the pop music industry by introducing a group of teenagers to the scene, all of whom had prior stage singing experience.

Their eponymous debut album was released in 2001 and was certified Gold in the US by the RIAA. The final Dream Street release was the soundtrack album to the released 2002 film The Biggest Fan starring former Dream Street member Chris Trousdale.

Despite the album going gold the group failed to become more popular than preteen market stars like NSYNC and The Backstreet Boys before them. One of the big factors that contributed was the waning appeal and popularity of the teen pop movement around 2001/02. In early 2002, four of the members and their parents (McCartney, Raposo, Ballinger, and Gallasso) filed suit against Louis Baldonieri and Brian Lukow to revoke their prior approval of their initial production agreement. The New York Supreme Court denied the request. The group officially disbanded, with only Chris Trousdale staying with the production team of Baldonieri and Lukow.

New Beginnings
Soon after the ending of the group, four of the five members began following different entertainment paths:

Matt Ballinger joined a band for a short time before disbanding to help form "The Juice", a band based in Massachusetts, where Matt attended Tufts University, Later broke up in 2007. Shortly after Matt joined a brand new band Open Till Midnight which is a New York based band.

Frankie Galasso is now a solo artist and even ventured into film and got a role in a movie A Tale of Two Pizzas and "Soltaire" .

Chris Trousdale, with the support of Lukow and Baldonieri, finished The Biggest Fan alongside Kaila Amariah, which would not be released until summer 2005, after legal proceedings were finished. Soon after finishing his movie Chris began recording and collecting songs for his new album, yet to be named/released and also filmed another movie called "Seducing Spirits". Chris appeared on Disney's "Shake It Up" in late 2010.

Undeniably the biggest breakout of Dream Street was the youngest member, Jesse McCartney. In 2003 he recorded a three-track album JMac and released the track "Beautiful Soul," which immediately became a top 20 hit on the preteen/teen station Radio Disney. Jesse then signed with Hollywood Records, owned by Disney, and began recording an album. Jesse also joined in on the Jingle Jam tour the same year with fellow Dream Street ex-member Raposo and up-and-coming popstar Stevie Brock. In the meantime, he landed a starring role on the hit WB teen show Summerland, which soon became one of the most popular shows for people aged 13-24. When he decided to re-release "Beautiful Soul," it became a large top 40 song, and was a common request for shows such as TRL. He then toured through the United States and Australia, making him a bigger star. His album, "Right Where You Want Me," was released on September 19, 2006. He was in a movie named "Keith", released in 2007. He is currently working on his brand new album called "Have It All", and recently filmed a pilot for his brand new TV show "Locke and Key". Read more on Last.fm. User-contributed text is available under the Creative Commons By-SA License; additional terms may apply.