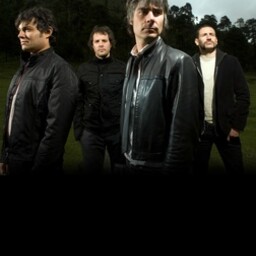 La Gusana Ciega came up from the new wave traces in the late 80's like three teenagers searching for their own sound. They kept underground polishing their first album: Merlina (1996). Along these years La Gusana have been building for themselves of a group of followers ranging from missunderstood teenagers to the most prestigious rockers in Mexico. This came to the attention of the rock sub label 'Discos Manicomio', with whom they signed and produced their second album in 1997 'Super Bee'. La Gusana Ciega, now as a cuertet, continued their carreer gaining popularity and consolidating as one of the most important rock bands in Mexico, a band of cult in all his glory.

Daniel gutierrez is also a member of the rockband called Cosmonova which he formed after breaking up in 2002.

In 2005 they announced their return to the stages with a esclusive concert for 2000 people. Read more on Last.fm. User-contributed text is available under the Creative Commons By-SA License; additional terms may apply.