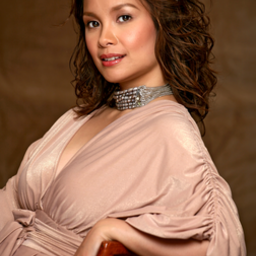 Her new comeback International cd "The Journey So Far" is now available in iTunes and will drop in stores August 9, 2011.

Salonga gained international stardom for her award-winning lead role as Kim on Broadway in the 1991 production of Miss Saigon. She not only won a Tony Award for “Outstanding Performance by an Leading Actress in a Musical,” but also the Outer Critics Circle Award, the Drama Desk Award and the Laurence Olivier Award (in London where Miss Saigon originated). Her vast array of theater credits also include Les Miserables as Eponine, the Witch in Into The Woods, Eliza Doolittle in My Fair Lady, The Goodbye Girl, They’re Playing Our Song, Grease, The Fantasticks, Paper Moon, The Bad Seed, The Sound of Music and Annie.

In Fall 2002, Salonga made another splash on Broadway starring in the hit revival of Richard Rodgers and Oscar Hammersteins’s Flower Drum Song, with a re-imagined book by David Henry Hwang, earning her another Tony nomination as Outstanding Leading Actress in a Musical.

In March 2007, Lea returned to Broadway to star as Fantine in the 2006 revival of Les Miserables and in July 08 she’ll embark on a 39-week tour of Asia and the Philippines starring in Rodgers and Hammerstein’s Cinderella.

A bona fide “Disney Princess”, Salonga can be heard on screen as the singing voice of Princess Jasmine in Disney’s blockbuster smash Aladdin. In a recent article in Southwest Magazine entitled the “50 Greatest Movie Soundtracks,” Aladdin was ranked #17 with specific note made of Miss Salonga’s version of “A Whole New World.” She is also the singing voice of Mulan in Mulan and Mulan 2.

She can be heard on the original cast recordings of Miss Saigon, Flower Drum Song (Broadway Revival), The King and I (with Julie Andrews and Ben Kingsley), The Nutcracker, Hey, Mr. Producer! and the Les Miserables 10th Anniversary Concert. Lea has recorded over a dozen solo CD’s including Lea Salonga, Lea…In Love, By Heart, Songs from the Screen, Songs From Home, Lea…Live!, Lea Salonga: The Broadway Concert and, most recently Inspired.

Salonga has also made several notable appearances on such television shows as ER, As The World Turns, Hey, Mr. Producer and Russell Watson: The Voice for PBS and the PBS special Les Miserables 10th Anniversary Concert.

Lea is originally from the Philippines and she currently maintains residences in New York, Los Angeles and Manila. Her proudest production to date is her daughter Nicole, born in May 06. Read more on Last.fm. User-contributed text is available under the Creative Commons By-SA License; additional terms may apply.

The Journey So Far

Now That's What I Call Disney