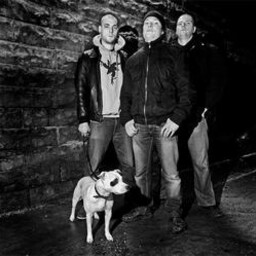 The band formed in early 1977, with an initial line up of Blair Hamilton (vocals), Greg Cowan (bass), Colin "Getty" Getwood (lead guitar), and Greg's brothers Colin Cowan (drums), and Martin Cowan (ryhthm guitar). According to Greg Cowan, their name derived from the fact that they were banned from five clubs in one week. Hamilton left the band within a month of its formation, with Greg Cowan taking over vocals.The band played their first gig in May 1977, playing a mixture of their own songs and cover versions of songs by The Sex Pistols, The Clash, The Damned and The Ramones. After building a strong local following, they were picked up by the local It record label, who released the band's debut single, "Frustration", in May 1978. They were then signed to Terri Hooley's Good Vibrations label, who released "Justa Nother Teenage Rebel" in November 1978, which saw the band receiving airplay on national radio from John Peel. A further single and the band's debut album, Self Conscious Over You followed in 1979. Shortly before the album was released, Greg Cowan was involved in a serious car crash that left him in traction for fourteen weeks and unable to play bass, so Gordy Blair (of another Belfast band, Rudi) joined, with Raymond Falls also joining on drums, because, according to Cowan, "Colin was such a bad drummer". Trouble followed the band around, and this led to them being sacked from Good Vibrations, so their next release was on their own GBH label in 1981, the "Magnum Force" single. This was followed by the band's first Peel Session for BBC Radio 1. GBH became Outcasts Only, and their next releases was the Programme Love EP in 1981. In 1982 they released a cover of The Glitter Band's "Angel Face", which spent over two months in the UK Indie Chart, peaking at number 21. The band were struck a massive blow when Colin Cowan was killed in a car crash. Colin was described by his brother Greg as "the core of the band. He started The Outcasts, he even gave the band its name". The large attendance at Colin's funeral prompted the band to play a thankyou gig at the Harp Bar, and the positive reaction convinced the band that they should carry on. They recorded a second Peel session and released the Blood and Thunder album on Abstract Records, which reached number 20 in the indie album chart. A few more singles and the Seven Deadly Sins mini-album followed, but the band split up in early 1985. Greg Cowan, Martin and Getty started a new band, Time To Pray, but this only lasted until 1986. Ray Falls joined the army.
Greg Cowan returned in 2003 with an "Irish punk supergroup" along with members of Rudi and Stalag 17, performing at the book launch of It Makes You Want to Spit!, which is still going as Shame Academy. Read more on Last.fm. User-contributed text is available under the Creative Commons By-SA License; additional terms may apply.
There are multiple artists with this name:

1) Outcast is a technical and progressive death metal band from France.

They started out in 1998 as Overlander. The band really launched its career with the release in 2002 of a 4 track CD “The Source Of All Creation” which gave the band its tone and musical direction: Thrash tinted with Death Metal. The MCD was well-received on the French underground scene. The band members were Wilfried (rhythm guitar and vocals), Clement (bass guitar), Romuald (solo guitar) and Mathieu (drums).

At the beginning of 2003, the band recruited Guillaume and Gregory as guitar players to replace Romuald and Wilfried who is now only a vocalist. During that year, Outcast performed at a series of concerts.

In February 2004 Gregory left, to be replaced in July by Nicolas (also a guitarist in Symbyosis and Reason Sleeps). At this time Outcast signed a licence agreement with the French label Thundering Records. “First Call/Last Warning” was released in March 2005 and combined Swedish Thrash Metal with Death Metal, but also emphasising melodies. The release of a new album was planned for fall 2007.

2) Outcast is a Death metal band from Belgium. They play a style similar to old school death metal with highlights of slam death metal.

The band was started in 1997 by brothers Nick and Tim, joined by Nico D (bass) and Wouter (vocals). Since their style was completely different from other bands in the region, they changed their name from "Stronghold" to "Outcast".

Wouter was replaced by Dréten. Outcast recorded a tape, released by Sven Aborted on Esophagus Records. Gerrit then replaced Dréten. In November 1998 a second guitar player was recruited: Wesley B (ex-Sektor, ex-Strong Individual).

In April 1999, the band recorded five tracks but these were not released, and Gerrit left. For some live shows, singers Steve 187 and Sven Aborted joined the band.

A tape of the recordings was released by the band, and the new singer Nico R also released the recordings on his own label. This resulted in a 3-way split with Immersed in Blood (Sweden) and Confessions of Obscurity (Belgium) at the end of 2000.

The band broke up in 2001 due to disagreements between the band members. Tim and Nick then recruited Geoff (ex-Retaliate) on the 4-string, Carrez (ex-Ectopia, ex-Caducity) on guitar, and Beermaster and Pieter on vocals. Beermaster left after the come-back shows.

In 2003 DHM Records released a mini-promo split CD with Retaliate. Carrez then left, but the remaining four members continued playing live shows. Side projects at this time included One False Move and Whatever It Takes.

In 2005 Outcast recorded a track for the Face Your Underground 3 compilation CD. A promo split CD with Moker was released on Shiver Records in January 2006. Geoff quit the band in February 2006 and was replaced by Wesley B.

In June 2006 the band worked with producer Dirk Miers on a first full album, planned for release by DHM Records in 2009.

3) Outcast was a side project of Beaumont Hannant and Richard Brown.

To date, they've only released one album (Out Of Tune) and two twelve-inches (Rollercoaster and Terrible). Out Of Tune was released in 1996 on One Little Indian Records and managed to touch on downtempo, trip hop, ambient and IDM.

4) Outcast is a hardcore band from Ohio, USA. Members went on to Morning Again. In 1996, the band released a split with Zao.

5) Outcast is a thrash metal band from Geneva, Switzerland that released an album "Seasons in Black".

6) Outcast is the artist that the soundtrack to "Outcast" (1999 PC game) was credited to. Read more on Last.fm. User-contributed text is available under the Creative Commons By-SA License; additional terms may apply.