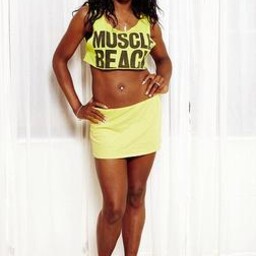 Young Sinitta already starred in the movie Shock Treatment in 1981, and sung in the musical Cats in 1983. She then played a role in the musical Mutiny in 1984. After lead singing for the band Hot Gossip, she released her first solo recording Never Too Late, which was mixed by Jellybean (Madonna, E.G.Daily). Further singles like "So Macho", "Cruising" and "Feels Like The First Time" and "Toyboy" were major club hits, "So Macho" spending 18 weeks on the British Singles Chart, peaking at Number 2. In 1984 she particpated in A Song for Europe, the UK heat of the Eurovision Song Contest, with the song Imagination which came 4th.

Sinitta wanted to go on and develop, for she was an adult and not a teenager anymore. So a Shirley Temple image did not work out for her any longer. SAW described Sinitta once as the "sexiest voice we ever produced". Sinitta was still at the height of her fame, and finding new producers like Ralf René Maué (London Boys) and Phil Harding (also PWL) was no problem. The hit "Right Back Where We Started From" gave her #4 in UK Top in June 1989. "Love On A Mountain Top"(#20 UK Oct 1989) and "Hitchin A Ride" (#24 UK Apr 1990) kept her there.

When the 1990s came, SAW's fame declined, and so did Sinitta's fame. People found it difficult to cope with the new grown up Sinitta, and associated her with SAW most often, which was not in style anymore. Sinitta went different ways, and recorded the "Supremes EP" (1993) and the album "Naughty Naughty" (1995), which also contains various Motown covers. "Love and affection" (1990) is a song by Joan Armatrading, while "Aquarius" (1993) came from the musical and movie Hair, that Sinitta's mother was in (as Sheila). Sinitta went back into musicals.

In 1997 Sinitta agreed to recorded the vocals for the single "You can do magic" by the group the Mojams. The single was part of television investigation into the UK charts as to whether a chart position can be created by false sales. The politician Edwina Curry's daughter was used as the face for the singer and single. Sinitta is not credited on the single.

She sang with Sonia Evans (also a former SAW artist) and Luke Goss (former Bros) in "What A Feeling" (1997). She also went back into movies and played herself in Heaven's a Drag/To Die For(1994). You also saw her in There's Only One Madonna (2001).

Sinitta is still giving concerts. Her so far latest single is the self-produced "Use Me Up" (1999) on Chocolate Boy Records. According to People Magazine, Sinitta is married to businessman Andy Willner but is known to be a former girlfriend of Simon Cowell. Sinitta also had a two year relationship with Hollywood actor Brad Pitt during the 1980's, it has also been rumoured that they dated again briefly in 1998. When questioned about her relationship with Pitt, she replied

"I think I was too wild for him! I was really young and at the peak of my career and I didn't want to sit and be romantic and eat dinner at home. "He was a lot more chilled and I think he was a bit taken aback by the things that I was doing. Like if I was hungry, I would open a bottle of champagne from my fridge because I certainly wasn't going to cook." I think he looked after me more than I looked after him. But I didn't want to be looked after too much. I didn't want another mother."

Sinitta worked on The X Factor show as a singing coach and in May 2005, performed on Hit Me Baby One More Time on British television station ITV.

In November of 2005, Malone announced that a woman named Kerry West will be a surrogate mother for Malone's baby with her husband. She made the announcement on the British programme This Morning. Simon Cowell will be the baby's godfather.[1]

2006 saw Sinitta compete as a celebrity contestant on SKY TV's 'Cirque Du Celebrite' as well as returning for the third series of The X-Factor, as part of Simon Cowell's mentoring team.

She is currently working with PMG (Prolific Media Group) Productions and is in the process of recording an anniversary special of her 80's hit "Toy Boy" with producers Nathan Thomas and Carl M. Cox, which is planned for release in August 2007, 20 years to the day that the original version came out.

Hits+ Collection 86 - 09 Right Back Where We Started From