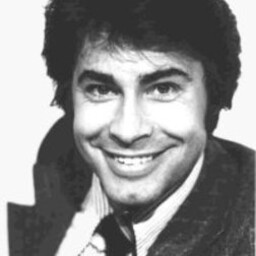 Roy Black (January 25, 1943–October 9, 1991) was a German Schlager singer and actor who appeared in several musical comedies and starred in the 1989 TV series Ein Schloß am Wörthersee.

Born Gerhard Höllerich in Straßberg near Augsburg, Roy Black attended the gymnasium in Augsburg and, aged 20, founded the rock and roll band Roy Black and His Cannons. His stage name derived from his black hair and his idol Roy Orbison.

Roy Black and His Cannons achieved some local fame and were offered a contract with Polydor Records. However, producer Hans Bertram decided on a solo career and a switch to romantic songs for his protegé, a decision which soon led to nationwide fame. In 1966, his single "Ganz in Weiß"—a romantic song about marrying in white—sold about 2.5 million copies.

In 1974 Black announced his engagement to model Silke Vagts (1945-2002), and the couple got married in Munich the same year. In 1976 their son Torsten was born. They divorced in 1985. Six years later Roy Black died of heart failure, which was a result of his addiction to alcohol and pharmaceuticals. Rumour has it, according to the German BILD-Zeitung and other news sources, that he committed suicide. Read more on Last.fm. User-contributed text is available under the Creative Commons By-SA License; additional terms may apply.