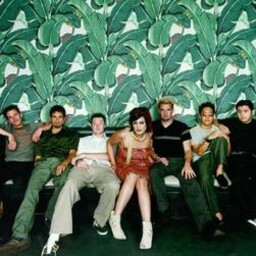 The band released their debut EP Introducing Save Ferris in 1996. Later that year, the National Academy of Recording Arts and Sciences gave the band a Grammy showcase award for best unsigned band, earning them a recording contract with Epic Records. The band released their debut full length for the label in 1997. It Means Everything featured several re-recorded tracks from the EP, several new songs, and a cover of Dexys Midnight Runners' "Come on Eileen," which the band released as a single and was a minor hit. The band also released "The World is New" as a single which was featured in the film The Big Hit as well as being used in Tara Lipinski's debut program as a professional skater in the 1998 Skate TV Championships.

The band toured extensively in support of the album, opening for bands such as Sugar Ray, The Offspring, and Reel Big Fish, and Powell also provided vocals on the Reel Big Fish song "She Has A Girlfriend Now." In April 1998, they made their television debut on HBO's music series Reverb and made an on-screen appearance in the film 10 Things I Hate About You. The album proved to be a moderate success in the United States, selling over 400,000 copies, and spawned three Top Ten hits in both Japan and Mexico.[1]

Winter 1998 saw the departure of drummer Marc Harismendy. Evan Kilbourne joined shortly thereafter, and the band began writing their follow-up to It Means Everything. The appropriately-titled Modified was released in October 1999, approximately one year later. The album saw the band moving away from their ska-punk roots and into pop-rock territory. It was largely panned by critics and fans alike, with fans unhappy about the drastic change in the band's sound. The band toured with fewer ska-punk and pop-punk bands as a result, opening for bands like Lit.

José Castellaños left the band in June of 2000, citing a desire to return to school.[2] He was replaced by T-Bone Willy's former bandmate from Six Feet Deep and Nuckle Brothers, Oliver Zavala.

The band continued to tour in support of Modified throughout 2000 and 2001, but by the end of 2001 were becoming increasingly less active. Throughout 2002, the band updated their website infrequently and toured sporadically, rarely venturing outside of the Southern California area. Rumors circulated that Monique Powell had been scheduling tour dates without the rest of the band's input or consent since mid-2001. The rest of the band had initially played the dates anyway, but eventually left Powell who assembled a new band so she could continue touring under the name Save Ferris.

In June 2002, the band's website announced they were working on a new album, but later that year, the site began redirecting to Powell's own website. The band officially announced their breakup in mid-2002, stating they'd originally wanted to quietly disappear from the music scene but Powell's insistence on continuing under the Save Ferris moniker forced them to officially announce a breakup. The band's final performance was held in Culver City on September 20, 2002.

On March 29th 2003 at Ska Summit 2003 in Las Vegas a band named Save Ferris played on the main stage. Monique was the only actual member of the former band. More statements were made about the new lineup and work on an album continuing but nothing came from it. Read more on Last.fm. User-contributed text is available under the Creative Commons By-SA License; additional terms may apply.

10 Things I Hate About You

Nevermind The Originals, Here's The Covers

10 Things I Hate About You Soundtrack